Too many hotels do not serve the guests

Two new hotels closed in the past weeks in Erbil. Perhaps that does not seem very big news, but it is the outcome of an interesting trend. A trend that has nothing to do with business plans and market research, only with spending money and the wish to get rich fast.

When I settled in Iraqi Kurdistan in 2008, there were perhaps a dozen hotels in the capital Erbil and a litte less in Sulaymaniya and Duhok. These were not enough to receive all the visitors from the rest of Iraq coming for holidays during the religious Eid festival and the Kurdish new year Nowroz. That was never a problem in the past. When the weather was fine, people would camp in the parks, or private houses would open their doors for the guests.

Since Kurdistan became a state within the Iraqi federation, tourism has been on a magic word. Get tourists in and get rich, was the idea. Rich foreigners would want to come and spend their money, and they need a hotel to stay. And at the same time, foreign businessmen started arriving to work with oil companies and other international companies.

After 2007, the building of new hotels started. Mainly in the 3 star category, but since then also three 5 star hotels have opened in Erbil and recently one in Sulaymaniya. The capital was the first with a Rotana and a Divan Hotel, as most of the foreign businesses and the diplomatic services are based here. Over the years, more than 200 hotels have been built, and in the small town of Ainkawa twelve with more under construction. Some people suggest that most of the new hotels are paid with money earned in illegal trade or other illegal activities. (Foto Rudaw)

The fact that many of the hotels were built by investors and then rented out to someone who wanted to furnish and manage it, is part of the problem. The rents are far too high for the hotels to be able to make profit.

All these hotels offer a total of, so I calculated, some 16.000 beds. That is far more than the market needs. They might fill up during the religious and new year holidays, but otherwise there is never enough guests for all those beds. Businessmen take the top end of the market, or rent an apartment or house that also serves as their office.

Because of the competition, prices went down. If you want to attract guests and compete, that seemed the easiest way. Competing by quality was not an option, as there is not enough well trained staff for all these hotels. But by decreasing the price, it became even harder for hotels to break even and to remain in business. Some managed by renting out rooms as office space, others just cut down the cost and thus cut down on service. Many of the 3 star hotels are so badly managed and offer such lousy services that guests will not return.

At the same time the cost of the electricity went up, with now almost 24 hours a day being covered by 'raisy', government electricity. The government increased the price quite a bit over the past years. In Erbil also labour costs increased as a consequence of the competition, although with Syrian refugees since the summer coming in and begging for jobs the salaries have come down a little again. 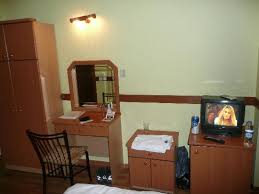 Nobody has really profited from the boom in hotel building. Those who thought to get rich, might perhaps if they were lucky have been able to get the first years rent. But the majority of hotel owners are suffering. And after the initial decrease of the price, the guests are no longer profiting either. Who wants the choice between bad and worse, in a system of hotel qualifications that cannot be trusted - because there is no guarantee that the 3 stars that were given at the opening are really still applicable for many of the newer hotels.

The hotel association begged the authorities to put a stop to the building, having predicted the problems already years ago. It is the hotel managers that know the market best, so they could see that apart from those few holidays when Baghdadi's and Basroui's fled to Kurdistan for a few days they would never be able to fill all those beds. Yet another problem is, that those guests mostly look for the cheapest accommodation, so their presence does only affect part of the many hotels.

But the authorities did not act, probably thinking that in this new capitalist system the market should do the work. Probably knowing that some of the hotels would collapse, and thinking this is the risk the investors were taking. Yet if the authorities had taken their role as the regulator seriously, they could have prevented the disaster - because there surely are more closures under way. Regulating the amount of hotels built by matching it to market expectancy would have made all the difference to the investors who are now losing, the managers who try to keep hotels running on a shoe string and staff that is sacked because of lack of income.

Hey Judit, all the words you've chosen to explain Iraq are appropriate, maybe there is not energy and water supply, but the hospitality services are remarkable. It has been 2 years to my visit to Iraq and I still remember the time. I was in Ireland for this time and unlike the staying experience according to your post, I'd say that I was at the right place for stay. You can find the site link below for the hotel.

It is so lucky to read your blog,it is full of useful message.I wish we both can do better in the future.
Matt Levine