One war is no more civilized than another

The war in Ukraine leads to discord: civilized countries at war versus allegedly uncivilized ones. Civilized victims versus the supposedly less civilized. And, most of all, between asylum seekers who are welcomed and those we would rather not see. 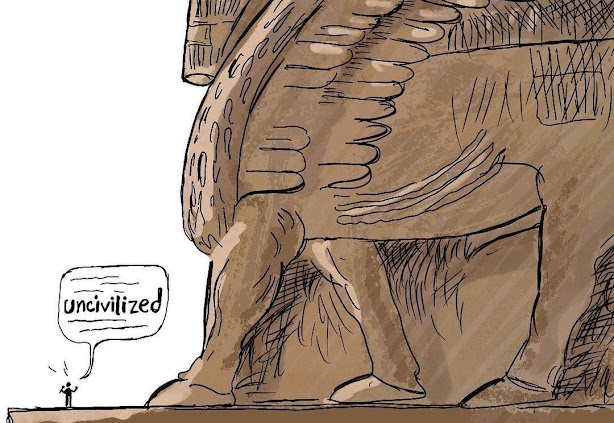 Suddenly, the hashtag #uncivilized was trending on Twitter in relation to the war in Ukraine. The difference in reactions to a war close to home in Europe, compared to other wars further away, was resonating badly with the victims of the latter.

They felt hurt when an American author wrote on Twitter that “this is the first major war between civilized countries in my lifetime,” thus implying that countries such as Iraq, Syria and Yemen, where wars have raged in recent years, are not civilized. And he was by no means alone in expressing the notion.

Listen to CBS News correspondent Charlie D'Agata talking about Kiev: “This is not Iraq or Afghanistan. This is a relatively civilized, relatively European city.” Or to Al-Jazeera on the refugees from Ukraine: “the way they are dressed. These are prosperous, middle-class people. These are not obviously refugees trying to get away from the Middle East or North Africa. They look like any European family that you'd live next door to.”

Both D'Agata and Al-Jazeera have apologized; it wasn't intended that way; they worded it carelessly; sorry. But hardly any of the other reporters and journalists who expressed themselves in much the same way acknowledged their mistake.

“This time, war is wrong because the people look like us and have Instagram and Netflix accounts. It's not in a poor, remote country anymore.” (Daily Telegraph) “The unthinkable has happened... This is not a developing, third world nation; this is Europe!” (ITV) “We are in the 21st century, we are in a European city and we have cruise missile fire as though we were in Iraq or Afghanistan, can you imagine!?” (BFM TV)

Such reportage not only reveals a set of double standards, it even implies racism. But that the news outlets’ editors-in-chief didn’t generally correct these statements or draw their correspondents’ attention to them would indicate that they aren’t perceived as being wrong.

One of the laws of journalism is at play here: the further away something happens, the less newsworthy it is seen as being for the reader/viewer/listener. Which is why the war in Ukraine has already filled more column inches and news time inits first two weeks than other wars further afield have in as many—and many more--years.

But how can there be journalists out there who believe this to be the first war dominated by social media? As if the videos out of Syria in recent years didn’t show that the Russians were bombing hospitals, residential areas and fleeing civilians there, too. As if you couldn’t have followed the battle against the Islamic terror group ISIS via Twitter and Facebook. As if, outside Europe and the US, smartphones are only used for making phone calls!

What hurts most is the prejudiced view that Kyiv is more civilized than, for example, Damascus or Baghdad. Kim Ghattas is one of very few journalists who have pointedout that Damascus is one of the world’s longest-inhabited cities, and that it had been at peace for a long time before the uprising against Syrian dictator Bashar al-Assad.

It can only make people from Iraq and Syria wonder what civilization is and who the civilized are, given that Iraq is the cradle of civilization and that majordiscoveries have been made here, including the wheel, writing, medicine, mathematics, algebra and law. They point out that people speak several languages there, too, and follow the world news. That these places, too, are home to well-trained doctors and judges, activists, people who work at the UN, and independentwomen.

At the same time, Yazidi activist Murad Ismael notes that there’s a feeling that human rights do not apply to everyone, so that suffering in uncivilized countries is seen as somehow less serious. “I learned from the Yazidi genocide that our worth is very little on the ladder of worthiness.”

Doublestandards are being applied everywhere. Europeans who want to fight in Ukraine are welcomed; several veterans have already joined the Ukrainian army to share their knowledge and battle experience. In contrast, Europeans and Americans who went to Syria to help the Kurds in their fight against the Islamic terrorist group ISIS have been tried and imprisoned on their return home for fighting there.

Resistance is also viewed in the same dual way: that Palestinian women who resist the Israeli occupation are rounded up and labeled as terrorists doesn’t lead to a great deal of protest in Europe. But Ukrainian women who take selfies with a rifle are celebrated as freedom fighters.

Even more painful for many refugees from the Middle East is the sight of borders that constitute an impregnable barrier for them being opened and Ukrainian refugees welcomed in. The same Polish border guards who recently sent Afghans, Iraqis and Syrians back into the cold, snow and frostbite of the border area with Belarus are now welcoming Ukrainians. That ordinary (Polish) citizens are queuing at the border to offer refugees shelter makes them jealous and bitter.

Making matters worse still are the politicians who are declaring Ukrainians to be “intelligent, educated refugees” who are “unlikely to spread terrorism”—as if every refugee from the Middle East and beyond would do exactly that.

In just seven days, about as many Ukrainians have sought refuge in the EU as refugees entered the bloc over the whole of 2015 during the Syria crisis. Back then, this led to increasingly strict asylum policies, agreements with Turkey and Libya on stopping refugees, xenophobia, and a rise in popularity for right-wing and the extreme right-wing politics. How different the situation is now! Asylum rules are being openly flouted, strict admission interviews have been phased out, and the Ukrainians are being allowed to stay freely for the time being.

And then there is the plight of the foreign citizens and students who were living legally in Ukraine and want now to flee the bombs, just as Ukrainian nationals do. No one is helping them to get out of Ukraine, and if they do manage to get to the border on their own, the Ukrainian border guards have even been known to stop them there.

When foreign ministers from countries like Nigeria and Ecuador called on the Ukrainians to let their nationals leave, their Ukrainian counterpart said it was all simply the result of ‘chaos at the borders’. There were no official restrictions, he proclaimed. The only apologies were made by a Ukrainian journalist who took a public stand against this kind of discrimination by her fellow countrymen.

In a war, everything becomes black and white. And it is no surprise that a war in Europe should be receiving more attention than one being fought far away. Part of the reason is that this war could have direct consequences for us in Europe if it proliferates, and especially if nuclear weapons come into play.

But victims are victims, whatever their nationality, color or religion. And while we know what can happen when we treat people differently because they come from different backgrounds, with the Second World War and the victims of the Holocaust still remembered annually, it is still happening.

While Ukraine gets all the attention, the wars in Syria and Yemen are sliding ever further from the spotlight. And while Ukrainians are given shelter, refugees of wars in other countries clamber into unstable boats and drown on their way to the same safety the Ukrainians seek. No one would deny the Ukrainians that attention and assistance in these dark days. But they are not more civilized than other victims of war. Nor are they alone in their suffering, which is no better or worse than anyone else's.

The citizens of Ukraine have not asked for war, any more than any of the other victims did. And they are no less scared, cold, tired and persecuted than others in the same situation, regardless of their color or religion.