Iraqi tales to be continued

The body guards of the Iraqi minister of  Finance have been picked up on terrorism charges. Deja vu? Yes, almost. The difference is that a year ago this happened to a deputy president who has since been given a death sentence himself and has fled the country.

Never a dull moment in Iraq. This week was a particularly interesting one, and one that is not really improving the popularity of Iraqi prime minister Al Maliki with most of his people.Sometimes it is difficult to understand the sequence and meaning of happenings in Iraq. Especially as so much of it is in some way linked, as is the case this week.

Let me start on Monday. Peshmerga forces outside Kirkuk fire on Iraqi reconnaissance planes. In other words, Kurdish military, not part of the Iraqi army as Baghdad refuses to pay for for these soldiers, shoot at planes that the Baghdad has sent to see what they are up to. The Peshmerga's were sent to the so-called disputed areas around Kirkuk that are claimed by both the Kurds and Baghdad, in reaction to the Dija (Tigris) Operation to guard those areas.

Kurdish politicians have called this operation to send Iraqi troops to the disputed areas 'against the constitution', because in the Iraqi constitution the status of these areas was undecided and to be decided on by census and referendum. The Kurds have since created a status quo in which they dominate the administrative and security  powers in most of the areas.

The problem was discussed on Monday between the Iraqi PM Al-Maliki and the president of Kurdish descent, Jalal Talabani. De latter had been angry about the way the PM had imposed the Tigris Operation on the Kurds, and had only recently returned to Baghdad after staying away in protest. The talks did not go well, as Al-Maliki did not want to recall the Iraqi troops that are part of the Tigris Operation. Iraq's two leading politicians did not even shake hands when they split up - which is almost unheard of in the Iraqi culture that is one of honor, pride and hospitality.


Since he became president of Iraq in 2006, Talabani has tried to be the one to end conflict and strife, especially when this touches the Kurds. He has made a point of being above the parties, which for many Kurds meant that he had chosen Iraq above his own people. Many times I heard Kurds say that Talabani had forsaken them and became Iraqi more than Kurdish.Yet without Talabani, the relations between Erbil and Baghdad would not only have been tense and bad at times, but the parties most certainly would have clashed in other ways than only with words.

When on Monday night Talabani had a stroke, many Kurds linked that to Al-Maliki's refusal to budge on the Tigris Operation. Al-Maliki visited Talabani in hospital the next morning, where the Kurdish governor of the disputed city of Kirkuk, the Kurdish/American surgeon Nasjmadin Kareem heads the medical team.

The critical health situation of the president was reason for two Iraqi TV-stations to report on Tuesday afternoon that he had died. Even though Talabani had given the nation many scares before - he had a heart operation in 2008 - never before did Iraqi media declare him dead. The Kurdish parties hastened to deny it, and after stabilizing the situation Talabani was flown to Germany for further treatment.

Yet at the same time, the Iraqi Prime Minister Al-Maliki played another card. On Wednesday ten of the body guards of Finance Minister Rafia Al-Essawi were arrested  for taking part in terrorist attacks. Talabani was not there to protest, as he did when the same happened to his deputy Al-Hashemi a year ago.

At a news conference, Al-Essawi said "militia forces" had raided the Finance ministry, his office and home in "an illegal action", reports the BBC. "They arrested all the employees and guards," he said. "Is this the behaviour of a government, or the work of gangs?"

According to the PM's office the arrest of the body guards was done after investigation by and under orders of the Ministry of Justice. Yet Al-Essawi says the action involved not only the body guards but at least a hundred members of his staff. ,,Does Maliki want me to believe that he had no idea about this?” he says. 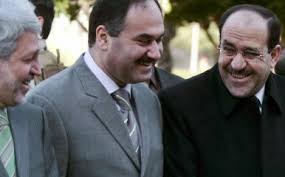 The Finance minister has secured a safe place in the house of the speaker of the Iraqi parliament, remembering what happened to Al-Hashemi. After his body guards were picked up on the same charges, they were also said to have confessed - as is reported about at least one of Al-Essawi's - Al-Hashemi fled to Kurdistan and then to Turkey. In September he was convicted of terrorism and received a death sentence in absentia.

Both Al-Essawi and Al-Hashemi are important politicians of the opposition party Al-Iraqia that came out as the biggest during the last elections but did not get the power, and are prominent Sunni politicians. President Talabani protected Al-Hashemi, by inviting him to his guest house in Sulaymanya. Now he is not there.

Could it be that the charges against the two are correct? Sure thing is that their bodyguards might not have a clean past. And even if for Al-Hashemi's doubts have been aired: Al-Essawi used to work as a medical doctor in Falluja, during the fights there with the American army. The Americans have since investigated him and found him honest and clean.

It looks like Al-Maliki is getting ready for the provincial elections in April, by getting rid of those criticizing him. And this could be the start of a very interesting period. Because already once before the Kurds and the Sunni parties linked hands to start a vote of non-confidence in the Iraqi parliament against the Prime Minister. They failed, because Talabani did not want to support them. If Talabani recovers, he might just have changed his mind. Surely the Iraqi PM does not count on the president to get well again soon.

Tales that will be continued...