Stop the mutilation of women

,,I call on mothers and sisters to help stop the mutilation of women.'' That was the very modest way Kurdish Prime Minister Nechirvan Barzani referred to FGM, or female genital mutilation, at the opening of the Campaign to Eliminate Violence against Women, on November 25 in Erbil.

Yet FGM is one of the subjects covered in the campaign that really needs attention. Foreign speakers, like the Consul General of the US  and the British Consul in Erbil mentioned it, but none of the Kurdish speakers touched on the subject, not even the female ones. It seems it is a taboo that cannot even be covered in speech. And even worse, in the published speech of the PM, this sentence is no-where to be found.

Did the translator during the opening hear something wrong, did I hear something that was not said? I look at my notes and it is clearly there. So the speech was edited, and who-ever did that took this out. 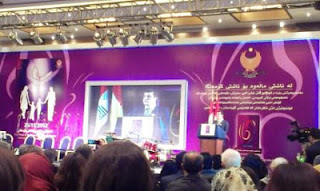 And yet I loved Barzani for the fact that he touched on the subject, however modestly, that women are behind FGM. Mothers, grandmothers and sisters take care little girls are circumcised, as they think Islam asks of them. And they want to make sure they are 'clean' and will be able to marry. Do men ask for it, I wondered many times. As far as I understand, many husbands do not even know their wives were mutilated. And I also know of husbands who are very unhappy to have a wife who was circumcised and therefore not able to enjoy sex.

Figures that have been published in the past couple of years show that in some areas of Iraqi Kurdistan, up to 90 percent of the women are circumcised (more information and figures here). Awareness campaigns by NGO's and some media probably have had some effect, but not enough. So in the law to eliminate violence against women that was adopted by a unanimous Kurdish parliament last year, FGM was also prohibited.

But while Prime Minister Barzani could announce the opening of special police stations and shelters to fight domestic violence, it is much more difficult to find ways to fight FGM. It involves women who think they are doing the right thing to their daughters, it involves midwives who make an income circumcising women, and it involves a taboo subject.

Compared to that, fighting domestic violence is a simple case. And one that can be communicated easily, as well. Let me take a few quotes from Barzani's speech, that say it all. ,,We know that violence against women is a serious threat to democracy. No system can call itself democratic unless it provides equality and justice. I am sure that you agree with me that violence against women is a terrible expression of inequality and injustice. At the Kurdistan Regional Government, we are determined to protect women’s rights and promote equality of opportunity.''

Dear Mister Prime Minister, this is noted and I am sure Kurdish women will take you up on this. Another quote needs to be noted too: ,,During our liberation struggle and while most of us were Peshmergas (freedom fighters), the role of women was witnessed in political activities, as freedom fighters and as family leaders, especially during the displacement and exodus. Thousands of girls and boys in today’s Kurdistan owe their upbringing to the perseverance and resistance of Kurdistan’s mothers who were able to resist the Anfal campaigns. Kurdish men who themselves experienced such atrocities should be ashamed to oppress women and practice violence against them.''

The issue is far more complicated then could be covered by the speeches during the opening day. Much of the domestic violence in Iraq is related to the trauma's of the war. Men who did not seek help to deal with these trauma's often react violently to their spouse. Any country with war veterans knows this. So in any campaign against domestic violence, some attention should be given to psychological help for the many victims of the traumatic stress syndrome in Iraqi Kurdistan.


It is good that the prime minister also  spoke out clearly against honour killing too: ,,There is no honour in murder. It is with this conviction in mind that we condemn the practice of honour crimes.'' And he urged religious scholars to participate in the national campaign. ,,Islam doesn’t permit honour killings. In fact, suicide is forbidden in Islam. I reiterate my respect to Islamic scholars, who indeed played an important role in the process of reforming the law, and urge them to continue in their positive efforts''.

These religious leaders, who were seated in the front of the hall, very recognizable in their toga's and religious hats, should also play a role in fighting FGM. They should make very clear that Islam does not ask for it, and that the prophet would not have liked it (as he liked women!). Because people in the villages and badly educated communities where FGM happens most tend to listen to their imams, it would be good to focus any campaign against FGM also on them - as NGO's have been doing.

Kurdistan is slowly but surely becoming more modern. Yet the changing of the minds does not follow the pace of the building of roads and malls, and extra attention is needed. ,,We will not be safe unless all women in Kurdistan feel secure. Women should feel that government, police and courts are there to provide them with security, justice and protection'', said the Kurdish prime minister.

That means end all kind of violence against women. And that means not only the honour killing and the domestic violence, but definitely also the mutilation of women. And that means more work needs to be done to find ways to implicate the law on Violence against Women, especially when it comes to FGM. Because it is all about respecting each other and living at peace with each other, at home and elsewhere.