When I see a child in a buggy in a Kurdish city, I know its parents have lived in the West. Any time I checked it, I was right. And I was told how impossible the Kurdish pavements are for a pram.

Most Kurdish mums and dads carry their children in their arms, from soon after their birth till they can walk. It is not just a habit; there is no other way. Kurdistan hardly has pavements, and if they exist they are impossible to mitigate by pram or buggy because of the holes, the bumps, the trees planted in the middle, the sudden endings and the high steps unto them.

When an expat friend put her new born in a special child carrier, she caught a lot of attention. Carrying your child to your heart, and having two hands free – that is something others wanted too.

I often feel sorry for new parents in Kurdistan. When you have a buggy, it also has space for those bottles and blankets the child needs. When you carry the baby around, where do you keep all those?

The way little children are cared for is very different in the West. In my country it is normal to let a child cry for a bit; picking it up all the time will spoil it. But in Kurdistan children that cry will be silenced immediately with attention, pacifiers and sweets. In my country, children go to bed early. That is good for the development of their brain, as children are proven to need as much sleep as possible. In Kurdistan they are kept up late; family and friends who pass by at night demand to see the baby.

Babies are everybody’s favourite in Kurdistan. They go from lap to lap, getting hugs and kisses. And the poor mothers get advice from everyone; if they do not adapt to Kurdish habits they are frowned upon or even scolded openly.

In my country, parents are autonomous, and they will listen to advice from doctors, nurses and books on how to care for a baby. No way will a baby be handed around; only if the parent offers you to hold it, you may do so. Nor will a parent by openly criticized, advice can be offered in a non-committal way.

Do we love our babies less? No, we just view them differently. They are a new life that we are responsible for, and that we try to raise as good as possible. Keeping them away from harm, like lack of sleep, bacteria and viruses that strangers can pass onto them.

In Kurdistan I often am reminded of how Westerners handle kittens and puppies. They are adored, hugged and passed around as a favourite toy. That seems to be what babies are in Kurdistan: everybody’s favourite toy.

This blog was first published in Kurdish in the daily Kurdistani Nwe
Posted by Judit Neurink at 5/24/2014 No comments:

The sweet taste of freedom

A dozen people were wounded recently when PUK supporters celebrated the fact that Jalal Talabani’s image was broadcast on TV whilst voting for the Iraqi elections. The sole fact that the leader of the PUK was seen on video for the first time since his stroke in December 2012 was enough for big celebrations. 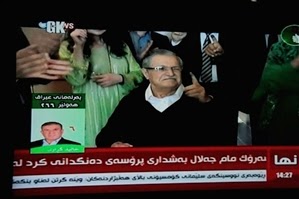 It was the shooting in the air that caused the casualties in Sulaymaniya, and fear and distress amongst the foreign community.

How high emotions run when it comes to politics in Kurdistan, baffles most foreigners. For most of us, politics are just a tool to run our countries. So much so, that many people even do not bother to go and vote because they are dissatisfied with what politicians are achieving.

Even though Kurds might feel the same about their politicians, and especially about the fact that eight months after the last elections they still have no new government – yet they still go and vote in droves.

Not only that, many people dress up, wear their best Kurdish costume when setting out to vote. I’ve been told that voting is a treat, a feast. In the West, many just see it as a bore, or at best a duty.

The re-appearance of a statesman, even of someone with Talabani’s stature, would never rouse so much emotion as in Kurdistan. But then I suppose we would never have been without any real news about his health as long as the Kurds were; our highly competitive media would not have allowed that. I often wondered why Kurdish journalists did not travel to Germany to get the scoop of a lifetime: the first moving images of a statesman who some even said was dead.

For foreigners, it is hard to understand that emotion, because we have become used to democracy and its system – which brings about a regular change of politicians. If our prime ministers stay on for more than two terms, in most western countries that is unusual. Party leaders also come and go every so many years. Nobody would be staying in function as long as Iraqi politicians do. 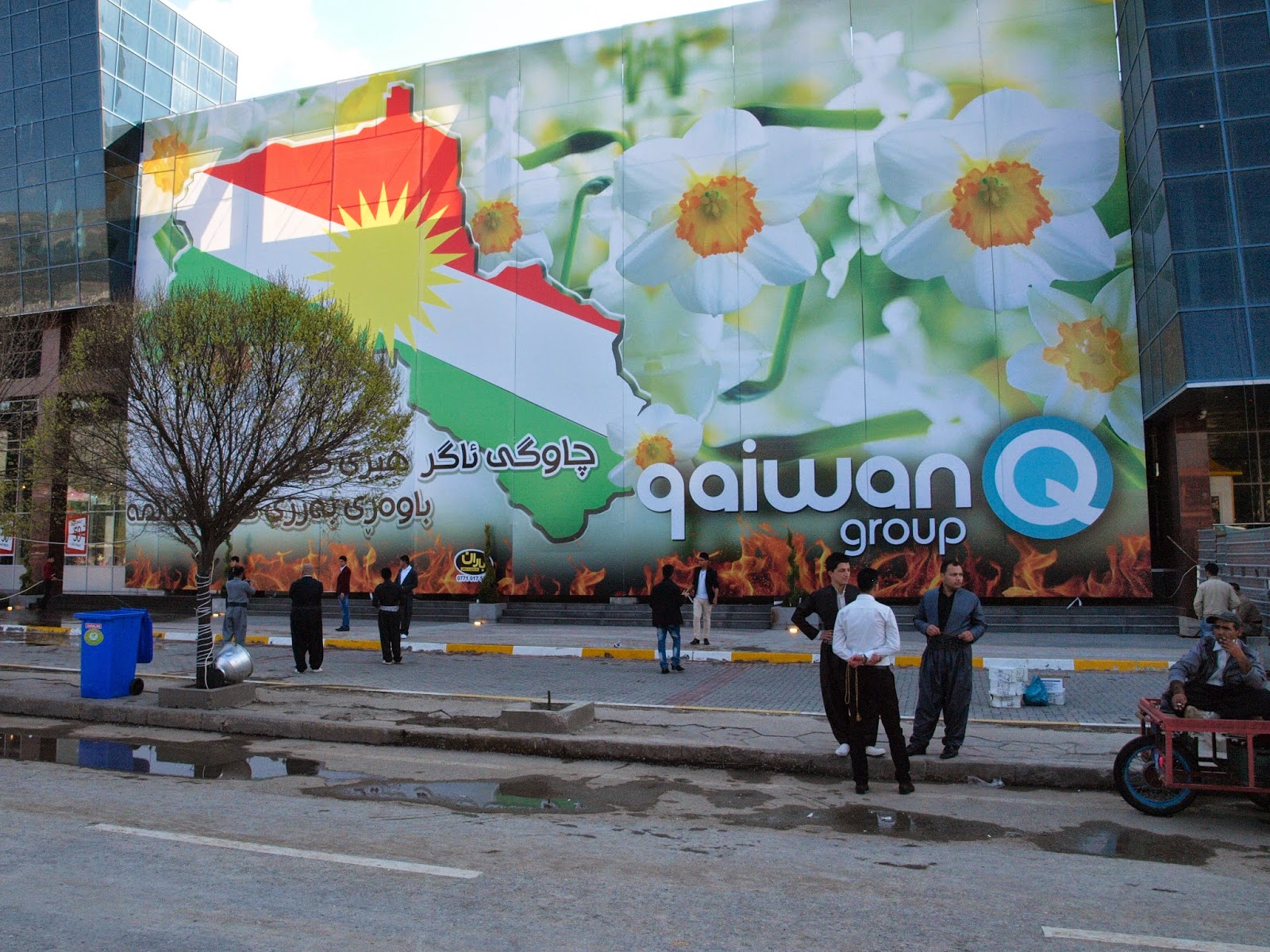 Staying that long, changes politicians into icons, into everybody’s ‘uncle’, into subjects of concern and gossip. They become figureheads that can hardly be replaced anymore – as is the case with Mam Jalal, as Talabani is lovingly called by his supporters.

In the West we are used to new politicians popping up. It could be healthy for Kurdistan, if that would happen here too. It means more talents get a chance to blossom, and the young generation gets more influence.

Yet changing seats more often will not change the way Kurds feel about politics. Because that feeling comes from the sweet taste of freedom and self-determination, after so many eras of suppression.

This blog was published first in the daily Kurdistani Nwe
Posted by Judit Neurink at 5/19/2014 No comments: 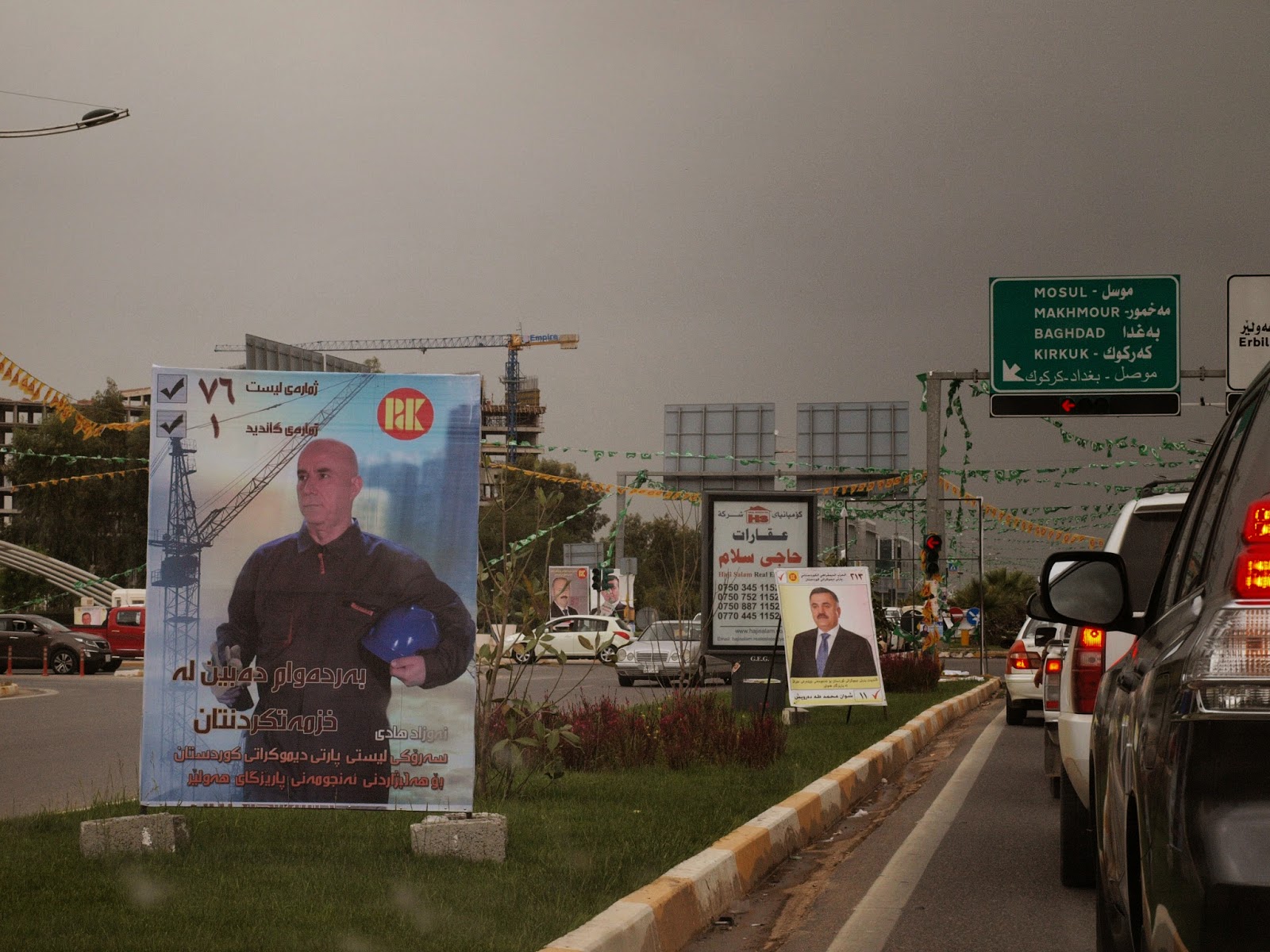 In election time in Iraqi Kurdistan streets get coloured by flags and posters; parties are competing for the best locations and adding another layer of flags above those the others already put up.

The result is festive, apart from when the wind gets hold of the flags or the posters and they end up dragging across the road, hampering the traffic. Streets have turned yellow, blue and green, the colours of the major parties.

Posters show us the candidates; are they men, women, old, young, attractive, vain - although it gives us little information about their ideas and ideals. Perhaps their body language can tell us whether we can trust them and whether they are open for new ideas or criticism.

This is so different from where I come from. Parties have a program, their candidates try to attract votes with slogans. We vote for the content, for the ideas and the agenda of the party.

When I drive around in Kurdistan in election time, I always wonder what the use is of the flags and posters. Who are the parties trying to convince? Because Kurds vote mainly within their clan, religion or party affiliation.

Are you part of a PUK family, you vote PUK. Do you see Islam as the leading force in your life, you vote for an Islamic party. Did you get a job through the party, you show your gratitude.

So who is going to change sides because of flags or posters? Why then spend all this money? Sure, it’s nice to have the town look cheerful, but in the money could be used so much better.

For instance by organising inter-party discussions to find out what issues are the most important for the party members, and putting the outcome in a party program. And making sure everybody knows what is in this program, through the media and in special gatherings.

Now that content does not play any role, people will talk of corruption and nepotism. Because that is what they see. They hear of people offering hundreds of dollars for election cards to be handed over to use for party votes. Of thousands of double votes, of the dead that still went to vote. 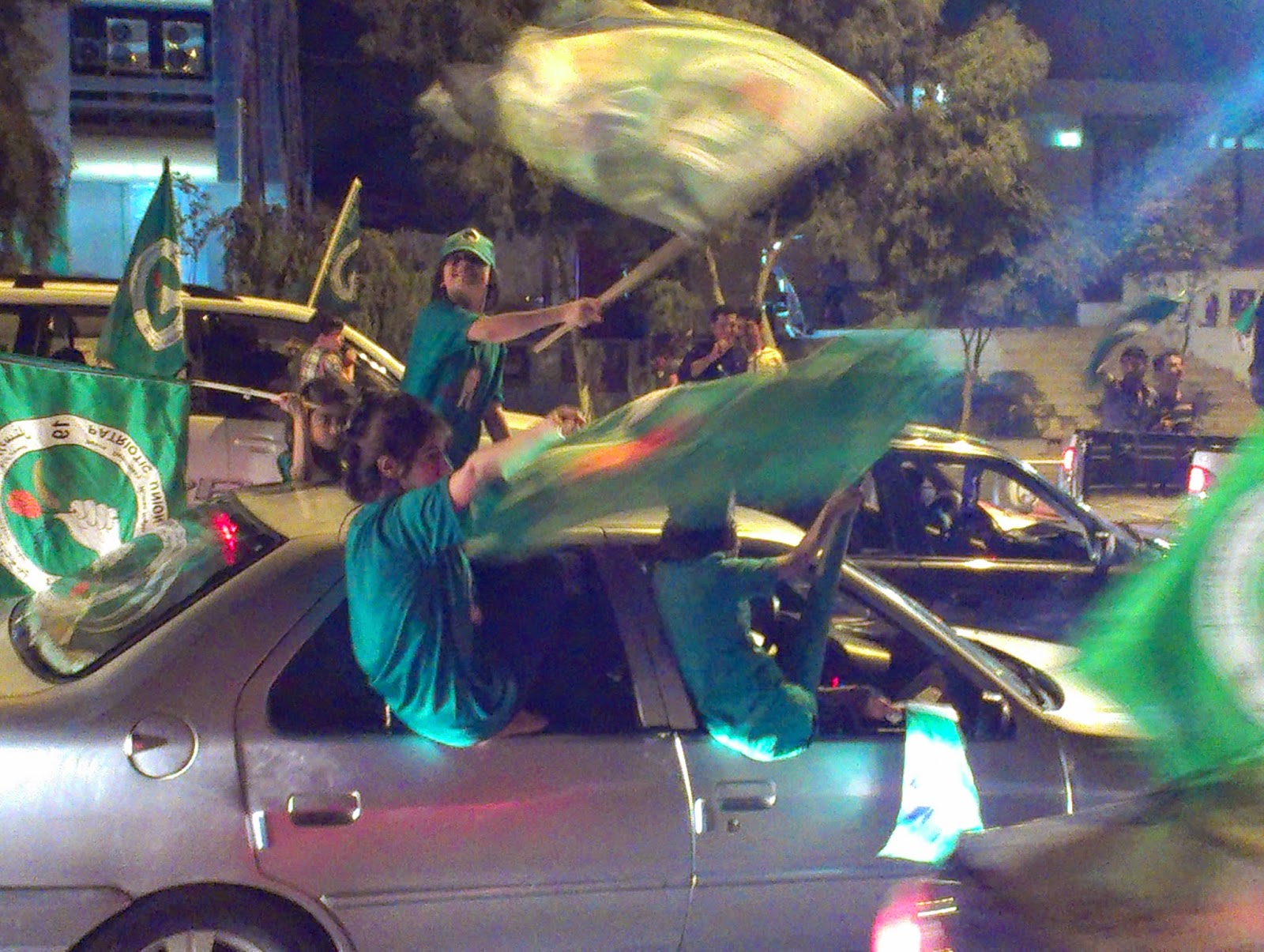 In my world, there are rules and regulations, but more importantly: a communal will to have fair elections. If experts fear the voting computer could be hampered with, we happily go back to paper and pencil. Because if elections are not fair, how can civilians ever respect a government that is based on them?

After over twenty years of autonomy and almost ten of federative statehood, Kurdish people deserve better too. Give them the chance to vote on content, not out of habit or even fear. People deserve fair elections.

This blog was published first in Kurdish in the daily Kurdistani Nwe
Posted by Judit Neurink at 5/08/2014 No comments: