Prices in the market have fallen since 'Zakho'. The rapid increase of housing prices in Erbil was halted. Radio and TV do not stop talking about it, nor do the Kurds in the streets.

'Zakho' - that means the attack on alcohol shops and massage parlours, followed by the attacks on offices and media of the Kurdistan Islamic Union, locally better known as Jegerthu. A lot of words have been spoken about the incidents, but what did happen? And why? 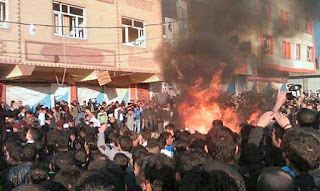 It has been become difficult to keep reality separate from stories that have been made up. What is clear, is that an imam in Zakho during the Friday prayers of December 2, talked of Jihad against alcohol sellers and places of shame. Crowds took to the streets. They set fire to 30 liquor stores, four massage centers and three hotels in Zakho, a border town near the Turkish border. Reports say at least 32 people were injured.

Rioters were allegedly encouraged by the Friday speech of Ismael Osman of Zakho's Rasheed Mosque. Yet KDP says the imam is member of Jegerthu, and the union answers he is member of KDP. And because of the alleged links with Jegethu, its offices and media in Zakho, Duhok city, Semel and Qarok were attacked, probably by KDP supporters.

It is the second time in six years that the offices of the Islamic Union are attacked and torched in Duhok, a Governorate that is dominated by KDP. In 2005 four senior Jegerthu members were also killed in the attacks.

KDP organised an urgent meeting for foreign diplomats to assure them KDP had no role in the incidents. Soon after the meeting the American consul general in Erbil deplored what happened, calling on the Kurdistan Regional Government to restore calmness and order in the area and to start an investigation of the events. He spoke of a ,,crime against the coexistence of nations and religious tolerance'', as most of the drink shops in Kurdistan are owned by Christians. Massage centres are relatively new  in the area, and are mostly in Chinese hands.

The incidents are not as simple as they seem. The background is a political one. First of all, Jegerthu has in the Spring been involved with other opposition parties (the Change Party Gorran, for instance) in demonstrations against the Kurdistan government of PUK and KDP - and mainly against the policies of the latter party. Opposition parties for weeks kept up protests in Sulaymaniya. Yet in the past weeks, the same Kurdistan Islamic Union has been involved in discussions with that same KDP about joining the new government a KDP prime minister is forming. Jegerthu supporters do not like this though, they see it as playing games. How can you jump into marriage with someone you said you hated? The union has lost quite a bit of support in the past months. 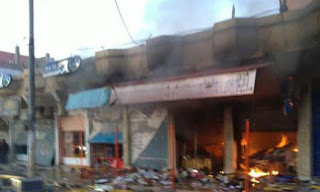 At the same time, an internal struggle is going on in KDP, between supporters of two wings in the ruling Barzani family. Some of my sources say that as a result of that fight KDP pored the oil on the flames. These sources - inside KDP as well as inside PUK as well as independent - think one side of the family does not want the other to get more powerful. The incidents were meant to keep Nercirvan Barzani from starting a new term as Prime Minister, so they say. He is whispered to be taking over the job from PUK Prime Minister Barham Salah.

Time will tell which is the truth. Clear is, that the Jegethu media after three days of war reporting, changed their tune. The party seems willing to return to the negotiating table with KDP on sharing power, if the remaining 17 of the party members that were picked up after the incidents are released.

The demonstrations in the spring in Sulaymaniya caused much economic damage. Bazari's lost trade and money, restaurants remained empty, taxi's had no work, real estate prices dropped, international investors quit projects. The incidents in Zahko and Duhok have created a tense atmosphere, in which many Kurds worry what will happen next. Will the protests in Sulaymaniya be revived?

The incidents could be meant as a warning. By Jegerthu, of what could follow if they do not get what they want in the new government. Or by KDP, to show its strengh. It depends on who you talk to, who's muscles are rolling.