Killing civilians in the Kurdish mountains

They were smugglers, so it was said, the 30-plus dead from a Turkish attack in the mountains on the border between Turkey and Iraqi Kurdistan. The outcry among the Kurds is enormous. But had it been as big if the victims were PKK guerrilla's? In the past that has not been the case, because we are all too used to attacks on PKK. 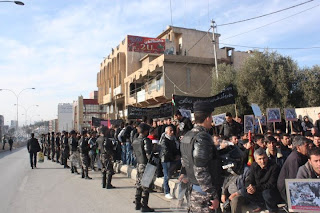 Demonstrations in the Kurdish regions of Turkey. Protest in Iraqi Kurdistan (the picture is taken in Sulaymaniya). And official condemnations. Many of them on Facebook, like this of former (and possibly future) Kurdistan Prime Minister Nechirvan Barzani: ,,I would like to express my sympathy and extend my condolences to the families and friends of the victims of the Sirnak province bombardment. The victims fell while conducting the everyday activities of their difficult lives. May they rest in peace.''

,,Once again civilians die and blood is shed as the result of an unnecessary war. Peace and stability must prevail. All the issues must be resolved through political and peaceful means so that this unnecessary suffering and bloodshed comes to an end.''

Another official one from the Kurdistan Minister of Foreign Affairs (although he is not allowed to use that title to the outside world, as Baghdad is in charge of foreign affairs), Falah Mustafa: ,,I would like to express my sadness at yesterday's unfortunate and tragic killing of more than 35 Kurds in Turkey, and offer my sincerest condolences to all our Kurdish brothers and sisters effected. This is further proof that violence only results in further misery and tragedy, and that peaceful co-existence can only exist through dialogue and tolerance. It always saddens me to see any such incidents occur, but even more so when it comes at a time when most of the world will be celebrating the arrival of a new year.''

Even the head of the Kurdistan security police, Assaish, Masrur Barzani posted on Facebook. ,,Unfortunately, at these last moments of the year, civil and vulnerable people of Şırnak encountered an unfair attack," the son of the Kurdish president Barzani wrote. ,,We denounce and condemn this attack…. No excuses for attack on civilians are acceptable."


Some see the incident as an opportunity to work on Kurdish nationalism. Editor in chief of the former newspaper Aso, Arif Qurbani writes in an opinion piece for AK News: ,,There has been no time better than now for attracting the attention of the world and shoring up international support against this oppression of Kurds. Kurds should not procrastinate and act indifferently; they should confront the threat in a way that it becomes a lesson for anyone who ever considers oppression and draw a limit for him.''

,,Today there is an opportunity that along with the developments of national uprising in Syria, Kurds of Turkey also begin public massive demonstrations and demand democracy, freedom and their rights. But this step requires our guidance, cooperation and support. Our leaders should not be afraid of defending our nation in Turkey. And we should take into account the fact that our silence would further encourage genocide of Kurds under the rule of Turks.''

Even though the strike took place across the border, on Turkish ground, the anger in Iraqi Kurdistan is hot. ,,See what Turks Did to Kurds..... do we deserve that?'', one of my Kurdish friends posted on Facebook. Pictures are posted with 'Stop Turkish terror in Kurdistan', and pictures of the bodies of the victims, lined up in the snow, with family members grieving over them.

,,Amazing details #Uludere missile attacks: half of the 35 dead were under 20 years old; 28 of 35 victims were from the same family! #Turkey'', tweets a colleague in Turkey. There you go. Who were these victims? If you have visited villages on the borders between Iraq and Iran or Turkey, you know. Young people, who use the dark of the night to ride on horses, donkeys and sometimes bikes through the mountains with their smuggling wares. That can be anything: petrol, tea, sugar, luxery products, alcohol. Those nightly drives feed whole families.

The reactions are interesting, because of the growing Turkish business interests in Iraqi Kurdistan. While Iran is the main invester in the South, Turkey has taken charge in the North of Iraq. Turkish firms are building, buying and selling. They are investing on all levels. The Turkish interests in Iraqi Kurdistan are worth many billions. Even though the Turks fight a battle against Kurdish nationalist rebels, they work closely with the Barzani family on making Iraqi Kurdistan the booming economical capital of Iraq. Even though they do not use the name 'Kurdistan' but speak of 'Erbil' as the place of interest, there is a lot at stake.

That is why for once, the Turkish government apologised about the attack. It was a mistake, was the message, the bombs were not meant to hit civilians. So now everybody is focussing on the civilians.If it had been PKK rebels, it would have been fine, seems to be the message. As if they are not people, with family members in their villages who will mourn them.Young people who left their villages in search for a better life for all, and are getting old finding it. One cannot agree with the tools they chose, or the battle they fight. Fact is that we have become too used to them being killed to still wonder about those issues.

No one discusses the fight of PKK, the means, the lost lives of young people, the use of an army against a rebel group. Or the fact that this fight has gone on too long, and has lost too many lives. Can we get the discussion back to the main subject please?