And they have a good reason to be worried. In the week that the Americans celebrated the end of their mission in Iraq, political quarrels erupted, a vice-president and a vice-PM fled to Kurdistan and a string of bombs exploded in Baghdad, leaving dozens dead. Facebook is splashed with pictures of gruesome scenes, and angry protests of Iraqi's against the new violence. 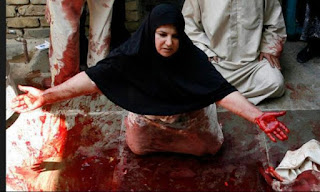 Are we back in 2006? Are Sunni's and Shiites at each others throat again? Many people are  holding their breath. Christmas 2011 - no peace on earth, the big battle for power in Iraq is back on the road. No more Americans to harass politicians to stop the violence.

The week after the departure of the Americans was a busy one. The unrest started in the province of Diyala. Some call this province 'a small Iraq' because of the mix of inhabitants: Kurds, Arabs, Turkmen, Sunni, Shiite - all are there. And yet, most people recognise the name for the province where violence goes on, where Al Qaeda in Iraq was active, where its leader was killed.

The council of Diyala decided that it wants to be an autonomous region, just like Kurdistan is. This is possible since the constitution declared Iraq to be a federal state. Recently, also the council of Salahadin province - more famous is its capital and Saddams town Tikrit - decided to start the procedure to become autonomous. That move was prohibited by Iraqi Prime Minister Nouri al-Maliki, who decided that the decision was made out of sectarian motives, and that Tikrit would be a centre of Sunni radicals and former Baathi's.

Diyala's decision was partly triggered by Maliki's move. Why have the Kurds been allowed to form their own regional government, and would other provincies not be? The Diyala council is mainly Sunni, and they acquired help from the Kurds by promising the disputed town of Khanaqin would be added to Kurdistan.

The opposition, mainly made up of Shiite angrily took to the streets, demanding the decision to be annulled. For more than a week now, the normal route from Kurdistan to Baghdad is blocked, and the traffic is diverted through Tikrit.

Maliki's veto on the desire to move on the federalism issue has lead to anger with his political rivals. His vice-PM Salih al Mutlaq called him a dictator, after which Maliki tried to get the parliament to vote on a motion of distrust against him. At the same time, the Prime Minister came with an arrest warrant against vice-president Tariq al-Hashemi, because he was supposed to have been working with Al Qaeda on attacks against Shiites, and more precise on the attack in the Green Zone in November that Maliki felt was meant for him. Al-Hashemi denies all involvement. 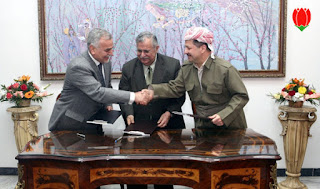 When Maliki told him to prove his innocence, he fled to Kurdistan, where Iraqi president Talabani and Kurdish president Barzani promised to keep him safe. Maliki's call on the Kurds to send him (and Al Mutlaq) back to Baghdad, or try him in Kurdistan, has been politely refused as 'unacceptable'.

Talabani called for an urgent meeting of the Council of Ministers, because the quarrel involves the most important Sunni politicians in Iraq.Their political block, which got most of the votes during elections in 2010, has already left the parliament and will probably also leave the cabinet. At the same time, everybody is very much aware that Shiite PM Maliki holds all the power, as he also holds the Defence and Internal Ministries and the security forces answer to him.

Not even a week after the departure of the Americans, the divisions between Sunni and Shiite in Iraq are higher than ever on the agenda. The swords that have been sharpened in the time that the Americans made the politicians talk and work together, are out and ready. Militias that have been forced underground, are ready, waiting for the call to arms. The final power struggle in Iraq has only just started.
Posted by Judit Neurink at 12/22/2011