One of the students of IMCK's post graduate in journalism, Media bo Khalk, wrote about the absence of translators in Baghdad, and the request for learning the Dutch language in Iraqi Kurdistan.

The Nihad Center for Certified Legal Translation is the first registered and recognized centre in Iraq for translations, posting in the front glass many signs indicating to the languages ​​for which the Centre can provide its services. One of them is the Dutch language.

,,We translate from the Dutch language into Arabic and vice versa, but this translation is not subject to ratification by the Iraqi Translators Association", says one of the employees of Nihad. According to her the Association is not giving a license to the respective translator "because it doesn’t have the ability to test the translator". And without this license, the translator can’t work officially in Iraq.

At the same time, she adds, people are rarely visiting the centre to learn the Dutch language or to ask for translation from or into Dutch, or to make correspondence or seek for seats in the Dutch universities to complete their study.

Zainab Al-Saadi, the Administration Director in The Iraqi Translators Association in Baghdad explains: ,,The Association has one licensed Dutch Translator only, but he is outside the country for the moment, where he works as a translator at the Iraqi Embassy in The Hague", noting that he returns to Iraq every two years. 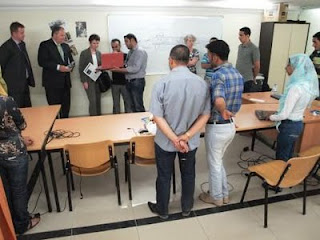 Sheikhan returned to Iraq a year ago, and he works now as a sworn translator for the Ministry of Justice of the Kurdistan Regional Government - Iraq. His expertise lies in translating Arabic, Kurdish, and Dutch languages, and he teaches Dutch at the World Languages Institution ​​in Erbil, the capital of Kurdistan Region in the north of Iraq.

visit of a Dutch delegation to Media bo Khalk

And he explains that "most of the demands for learning Dutch by the students is for the reunification" as the laws in the Netherlands impose learning the Dutch language upon the applicants who request admission to join their spouses, parents or family reunion. ,,One of the students attends to learn the language is from Kirkuk City" (93km south to Erbil City), because she is expected to marry a person who lives in the Netherlands.''
He says that the curriculum adopted by the students contains information about the Netherlands, and is the adopted the Dutch Ministry of Justice, as are the examinations needed. A problem is though that those who wish to do such exams or request for visas have to go to one of the neighboring countries of Iraq, because the Embassy in Baghdad doesn’t provide such services.

Mohammed Khidhir, 27 years, from Hawija City (55km from Kirkuk City) cites a different reason for wanting to learn Dutch. He is a trainee journalist in the Independent Media Center in Kurdistan (IMCK), which is related to the Dutch Press Now Organization. He worked as an interpreter for Dutch journalists. ,,I used to deal with them in English, and now I wish to communicate with them in their own language", and he also wishes to visit the Netherlands.

Khidhir prefers to use the Internet more than books and pamphlets in learning the language, and that is because he ,,learns translation and he is not an academic student". He uses websites like livemocha.com and the translation services at Google's famous website "for translating texts and articles". He intends to buy DVDs as well to learn the language.

It is worth mentioning that there isn't any special department or branch to teach the Dutch language or its literatures at any recognized college or university by the Ministry of Higher Education in Iraq.