The market has stopped

The protests in Sulaymaniya are still going on. The daily gathering at Saray Square near the bazar of Sulaymaniya has grave consequences for the shops and the market. Khaled Sulaiman wrote this opinion piece about the problems for Awene.

by Khaled Sulaiman
I asked a young man in downtown Kalar, who is working in real estate aspect, if the demonstrations in Sulaimani affected his business? In response: “The market has nearly stopped; instead of buying and selling we are talking about politics.”

I asked another man, who is working in the Rizgary cattle market and is making his living in that way: “How many animals have you bought and sold during the Nowroz feast?" He told me that last year before the new year, he bought and sold more than 20 animals including sheep, goat, and bull. ,,But this year the work has stopped as if there were no Nowroz at all.”

These small stories and others which we will mention, raise big questions about the daily life of people and the family economy on the one hand, and the effects of the demonstrations on the small businesses on the other hand.

For these businesses ceremonies, the seasons, and other special moments have its impact on their work. In a place like Sulaymaniya in this month of Nawroz taxi's, restaurants and hotels play an important role in the daily economy. A chat with taxi drivers is enough to tell you that their work during this Nowroz was not only insufficient, but lower than their needs.

On March 23 I opened this subject with a driver. His response showed frustration, since he could not take his children to a picnic during Nowruz. “Dear brother, last year I worked and filled my pockets with money in the two days before Nowroz. Therefore I did not need to work during Nowroz and I took my children to a picnic. But this year I could not get that money and I was obliged to work during the feast. Indeed this year’s work was very bad.” 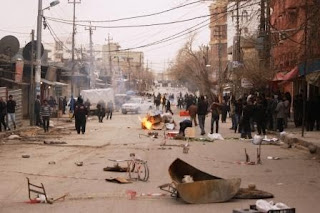 Many media channels have not mentioned this phenomenon in a good way, as some consider this as an act against the demonstrations. Although these stories are circulating mainly in the circle of small business, the effects of the demonstrations should be mentioned, since capital and investment do not in involve the housing sector. The daily economy is one of the main bases of investment.

Faisal Ali, a Kurdish economist and member of Kurdistan Economic Forum, says that ,,the small businesses play a key role in the country’s economy. They provide good work opportunities in the cities and villages, even in the neighborhoods and the streets, especially for those people who's income is limited.”

On the other hand Faisal Ali inquires that what the KRG, the civil society organizations and the Chamber of Commerce have done to promote this aspect in the Kurdistan region? He brings an example of selling yoghurt in Kurdistan Region which offers many people in the villages work.

According to him that there are many other activities that need promotion. He points out that many giant companies like the Japanese car factory Toyota seek “family business” in making many small tools.

It is said that because Kurdistan does not have giant industrial investment and that the money that has been accumulated is invested in building residential units, the demonstrations have no effect on the Kurdistan region’s economy. But according to what is mentioned above, the economic theories are based upon the family and daily economy. Big losses have been inflicted to the small business owners during this year’s Nowruz, when they compare it to last year.

It should be said that during the Kurdish governance small business have not been promoted and have been neglected. The duty of the KRG sixth cabinet is to once more revive this aspect in the 2011 budget.

Translation from Kurdish: Dana Taib Menmy
Khaled Sulaiman is editor in chief of the Kurdish magazine Haftana.
Posted by Judit Neurink at 4/01/2011