People are the centre of the democracy

Sulaymaniya is coloured green. The main streets of the town are disrupted because of the celebration of March 7, the uprising against Saddam. People dance for hours around their cars in Salim Street. Kurdsat shows me life footage, but at KNN I only see images of the demonstration of today. The colour green is not there at all.

Thousands of protesters are assembled in the centre of Sulaymaniya for the 20-somethingth day. I know it from people who went to the bazaar and told me, I know it from KNN, I see pictures in independent newspapers. But if I stay at home and only watch PUK or KDP-channels, I have no clue of what is going on in the world outside, a few miles from my home.

Erbil is coloured green and yellow. The main streets of the Kurdish capital are disrupted with people waving flags and banners for PUK and KDP at the 20th anniversary of the uprising on 11 March 1991. Zagros gives me life images, Gali Kurdistan as well, Kurdsat and Kurdistan TV mention it in their news broadcasts. But again if I were only tuning in to KNN, I would not be informed about what is happening outside, in my own country.

Perhaps if I buy independent newspapers, I will get the news, but much later. I want it now, because I want to be well informed. I decide to try Radio Nawa, but they do only words, no images. And I wonder: Does working as a journalist for a party paper really mean that you must close your eyes? That you keep information from your readers that is important for them to know, as it is happening in their country and affects their opinion? Do journalists of party papers really want to decide what their readers should think? 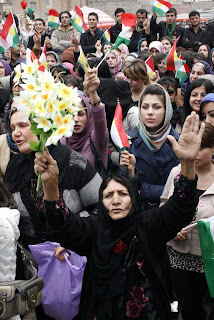 I think not. I guess they want to inform the Kurdish people just as much as other journalists want to. But they feel they have a loyalty conflict. They feel that as they are paid by the party, they should only report what they think the party wants them to report. As thus, they censor themselves.

The result of this is that readers/viewers/listeners of party media only get part of the story. To be really informed, they have to switch channels; they have to buy more than one paper. Many do not - and do not even realize that there is another side to a story, or that things are happening that they have no knowledge of.

Journalists are supposed to be an important part of a democracy. In the triangle of people, politics and press they must make sure people are informed about what is going on in their society and what politicians do about it, and on the other hand they convey to politicians what are the thoughts and wishes of the people. They are supposed to be the so called fourth power, reporting and checking on the deeds of politics, government and justice. In Kurdistan, most journalists do not play this role.

Journalists are bound by their own ethic standard, which tells them not to be biased, to report in an honest way, not to omit information that is important as to put a subject in its context. In Kurdistan, most journalists do not adhere to these ethics.

Yet, democracy in Kurdistan is growing. We saw last week how the parliament is growing up, calling the Prime Minister to come and explain what has happened. He comes and answers them, partly in front of TV camera’s so all his subjects (and their voters) can see. The parliamentarians vote on their first motion of confidence against the government. They write history.

In this climate we also need journalists to make history. To start playing the role the democracy is asking them to play. Not as part of the political system, but as reporters, as honest informers of the citizens.

Because in a democracy, it is the people who are the centre of the system. It is their votes, that put politicians in their seats. And it their votes, that can remove them if they do not listen to the peoples wishes. The parties are just a tool to serve the people. And journalists should check on how this is working out, and report on that. 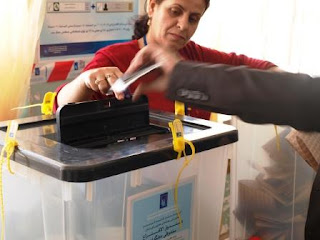 While in the past weeks Kurdistan is growing into its role as a democracy, shooting at civilians demonstration for their demands has no connection to this progress. The only positive result I can think of is that it serves to teach politicians where the limits are in a democracy – but that process should not cost lives. That discussion should take place in the Kurdish media, as the Kurdish people need to know if and how progress is being made. Demonstrations are a democratic tool, and journalists need to report on them to make politicians realize what needs to be done to keep the people happy.

So is this something party journalists cannot do? I wonder why not. If their bosses feel that they are all part of the democratic system, it is the party media that should start the discussions. To give the people a voice. It should not be a problem to disagree; politicians will learn most from opinions that differ from their own. It serves to sharpen their minds and arguments.

My own newspaper used to be part of a party, as most media in my original home country, the Netherlands. It still has ‘the colour’ of that party and chooses subjects that are close to the hearts of voters of that party - but now is reporting in a neutral way. Its opinion page is open to all, and has become an influential platform of opinion makers and others on a broad number of subjects.

I challenge party newspapers and newspapers published with party money in Kurdistan to take up this role. Your politicians need to know what people in their country feel, need, want and demand. And your readers need to be well informed to be able to make up their minds. In this way media can really play their role in the society.

This article was published in Kurdistani Nwe (March 14, 2011) and on the website of Rudaw.