Kurdish citizens must call for their right


When the Kurds voted for independence, Iraqi sanctions soon followed. The Kurds are now blaming their political parties - when they should be uniting in protesting against Baghdad instead. 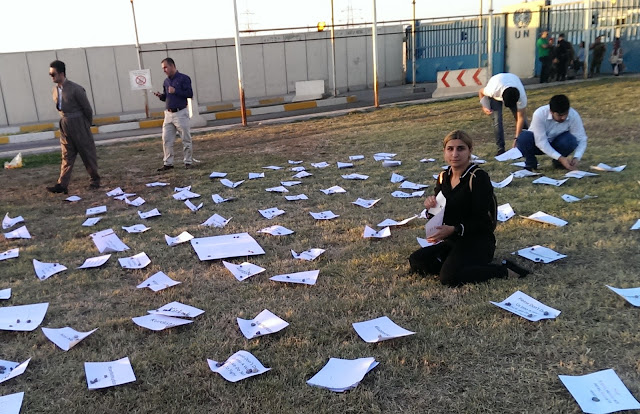 It’s been almost three months since the Iraqi Kurds held a referendum on independence, a move the federal government of Iraq responded to almost immediately with sanctions. But instead of massive protests to convince Baghdad to change its tune, Kurds have mostly stayed at home in a state of depression.

What was true during the referendum is true now: the Kurds should look to the Catalans. While they held a referendum around the same time and were also punished by the Spanish central government, they have not stayed crying in a corner. Instead, they have seized each and every chance to hit the streets and demonstrate, whether it be in Barcelona, Madrid or—lately—Brussels.

The Kurds and the Catalans are not only peoples with a region of their own within a federal state; they also share the desire to be independent of these states. And they have suffered for organizing referenda to publicly express this wish —from Iraq and Spain respectively. This kick-back has been political, but also juridical: both voting processes have been declared unconstitutional and cancelled, and arrest warrants have been issued for their organizers.

Both federal governments have also imposed sanctions of some sort. In Catalunya’s case, Madrid took over the regional government and ordered elections. In Kurdistan, Baghdad closed the airports to international traffic and sent in the Iraqi army to take over areas the Kurds and Baghdad have been arguing over for decades, as well as the oil wells situated there.

The main difference between the two regions is that in Catalunya, less than half the inhabitants support independence, while in Kurdistan hardly anyone is against it. Many might have been against the timing of the Kurdish referendum, but they were not against the ideal of an independent state.
In Catalunya, life goes on. And while some companies have decided to move their headquarters elsewhere, the economy is still thriving. In Kurdistan, however, life has been disrupted completely.

The economy has crashed. The Kurdistan Regional Government (KRG) can hardly pay its civil servants due to lack of money, since over half its oil income has disappeared into the hands of the Iraqi government. The Iraqi military operation has added another 10,000 IDPs to the thousands already in Kurdistan. The region is isolated without direct flights to the outside world. And foreign investors and businessmen are putting their businesses on ice or staying away altogether.

The difference in the way the civilian populations have reacted is also striking. The Catalans haven’t missed an opportunity to take to the streets and protest the measures imposed by Madrid, but the Kurds have only staged a couple of minor demonstrations in the Kurdistan Region and abroad against the military take-over of lands they consider part of their future state, most importantly the oil city of Kirkuk. Then silence set in, until recently, protesters who seemed mainly politically inspired, marched in the Kurdistan capital Erbil against the way Abadi failed to mention the Kurdish peshmerga troops as part of the operation that defeated ISIS.

Sad and depressed, the Kurds complain bitterly. About Baghdad, and the way the federal government is now trying to deny the Kurdistan provinces the status of a region, even though this is enshrined in the 2005 constitution. About the Kurdistan government, which has started playing the Iraqi anthem before the Kurdish one on official occasions. About the Kurdish leaders who don’t have any solutions, and who refuse to use any of the money they are said to have pocketed to help their people. And mostly about their politicians, who remain unable to unite against Baghdad.

But how can you expect politicians to join forces if their people only complain about them and each other and show no real initiative themselves? And how can one expect the Iraqi Prime Minister Haider al-Abadi to listen to Kurdish politicians’ calls for direct negotiations, if their constituents remain silent and apathetic? What incentive does al-Abadi have to stop harassing the Kurds, which helps appease his own supporters?

And how come the streets of the KRG were so full of flags and slogans before the referendum but so very empty now? It must be the effect of decades of dictators and repression, when any criticism could be dangerous. The notion that protesting is dangerous is so engrained that even the younger generation born and raised during the quarter century their region has enjoyed a semi-autonomous status are affected.

In the run-up to the referendum and after it, the Kurds and the Catalans felt like kindred spirits and looked to each other constantly. Now it’s time for the Kurds to follow the Catalan example. They need to get out on the streets to show Baghdad that enough is enough, and to start blaming the Iraqi government for their predicament rather than their own politicians—though that isn’t quite right: Kurdish politicians should have listened to the warnings to delay or cancel the referendum. Still more importantly, though, they should unite now that it is so critical to present a united front to Baghdad and the world. But as they have always found this hard to do, with the civil war of the nineties still fresh in everybody’s memory, it’s time for the Region’s citizens to speak out.

For the Kurds are in the right. The constitution provides them with autonomy within the Iraqi federation. Many of the measures the Iraqi government has taken diverge from past agreements made to entice the Kurds into staying in Iraq after the fall of Saddam Hussein. And some are discriminatory: why should the Iraqi regional airports of Basra and Najaf be allowed international flights when Kurdistan’s airports are not? If Abadi really wants to keep the Kurds inside Iraq, as he says, he should recognize and actually protect their rights within the federation.

The Catalans recently filled Brussels with shouts of ‘Viva Catalunia’. Well, the Kurds can copy this with a ‘Beji Kurdistan’ in every Kurdish town and city. Let’s get those Kurdish flags out again and add some Iraqi ones, too, because we need to be realistic. Which is why the referendum slogan—that ‘Kurdistan is not Iraq’, should be changed to ‘If Kurdistan is Iraq, we have the same rights as other Iraqis.’

Then let’s see if Baghdad can really afford to remain silent.

This opinion was published in the Jerusalem Post on December 21, 2017. Since then, Kurds rose up in the eastern part of Iraqi Kurdistan, went to the streets, burned party buildings. And when the security police tried to restore the calm, at least six demonstrators were killed. After three days of violence and protests, and dozens of activists as well as journalists who were picked up, a tense calm returned.
Posted by Judit Neurink at 12/29/2017