It was a catching and emotional sight. 730 coffins draped with the Kurdish flag stood side by side. Politicians made speeches. The coffins were taken under military escort to Chamchamal. Buried at the cemetery of the new Anfal Monument and Cultural Centre, with the Kurdish president and former Prime Minister involved in the burial. 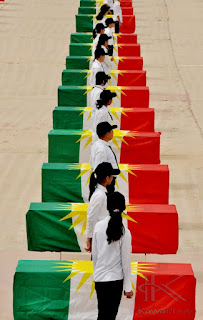 These kind of images are not new, and have been repeated in history. They remind me of the graves of those fallen in de Second World War, although I suppose I should be reminded of monuments for people killed during genocides. Because that is what it is all about, in Chamchamal.

The 730 bodies represent the thousands of Kurds killed in Saddams Anfal operation against the Kurds. These bodies were found in mass graves in the deserts of Diwanija, in the South of Iraq. Between 1986 and 1989 thousands of villages were destroyed and the inhabitants taken away, many transported outside Kurdistan to be shot and covered with sand. Only after 2003 the bodies were uncovered in the mass graves. Many still are to be discovered.


The graves do not only contain men, but also women and children. Sometimes whole families are there. Sometimes only the men had been taken while the women and children were relocated in special camps, that later became towns like Chamchamal.
(Photo Kawa Shekh Abdulla)

The identity of those in the coffins is not always known. For those that have not yet been identified, DNA profiles have been made, and will be compared to those of family members of the missing to be made in the next weeks and months. 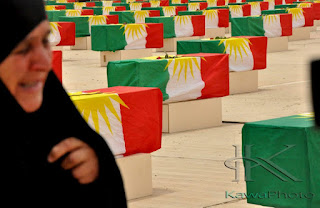 Still many Kurds are waiting for news about their missing, like about the father of Nabaz Fatih (30), who was eight years old when his family was taken away. His father never returned. "I can't speak, I just cry," he said to the Kurdish newspaper Rudaw. "I look and I cry. I am very, very sad. Because all those people were family – not Peshmarga, just working and doing business – and they're all gone for nothing."
(Photo Kawa Shekh Abdulla)

Anfal has left lasting scars to the Iraqi Kurds. Not only were many villages destroyed and never rebuild - because those that survived did not want to go back to a living far away from civilization, hospitals, schools - collective towns like Chamchamal were fatherless families went to live still are known for the aggression and crime that derived from the pain and the sadness endured here.

Anfar also brought the Kurds the sense of being a victim, which many still treasure. Victims of Saddam, which endured pain and hardship on a scale about which for a long time hardly anything was known outside the region. Many Kurds still feel this way, even though the evolution of time has brought them victory. Kurdistan now beyond any doubt the best place to be in Iraq - it has developed rapidly, trying to catch up with the world and forget the long years of isolation and discrimination. While the rest of Iraq still suffers violence and infighting, Kurdistan is a safe place. 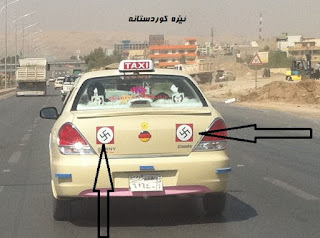 Anfal is not something to forget. It is something to be remembered for the past generations, to make sure it does not happen again. But remembering and mourning is not enough. It needs to be accompanied with education, to teach young people where xenophobia and discrimination may lead to. To teach them that what had been done to the Kurds, should never be repeated - to nobody. To make them aware of the historic implications. So that cars with stickers like these will quickly disappear from the Suleimani roads.

As this picture was taken (and shared by Facebook) around the same time as the coffins were taken to Chamchamal, it shows that to mourn is not enough. Kurds should realise they are now part of the world. A world where genocide is a crime against humanity. And that goes also for genocides in the past.

Nice article and made me emotional, about the Picture of the TAXI, for most of the Kurds that Nazi symbol is used for the love to germany not for the Nazi Idiology.