What do they teach in Kurdish schools?

Do young Kurds (and other Iraqi's) just show their love for Germany when they put a swastika on their car, as suggested in a comment on my last entry? Do they not really know what the swastika is the symbol of? Even if this is so, something has gone badly wrong at school. Especially in Kurdistan - where elder people will remember that Saddam liked Hitler. And in this part of the world, you stay away from you enemy's friend. 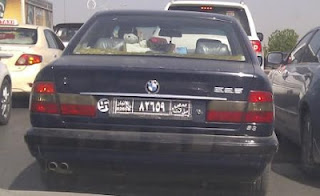 It is not only on Kurdish cars I have seen this very old symbol, that has become very much part of the German ideology under Hitler - as you can see from this car from Mosul, photographed in Sulaymaniya. And it is not only the symbol, it is also the talk of some young people who tell me they adore Hitler.

For me, coming from Holland, the issue is a sensitive one. My country was occupied by Germany in the forties, many hundred-thousands of Jews were singled out and (eventually) killed. And not only Jews. Everyone who resisted the occupation was thrown in prison and sent to the labour camps. As were those who were different, like gays, gypsies.

My family is not extraordinarily hit by the occupation, even so, it still plays a role in the family history. My father could not study and was forced to work in a milk factory. My parents could not marry until after the war, after an engagement of many years. After the war, because of the bad situation the country was left in, two of my fathers beautiful young sisters died of tuberculosis, as did a brother of my mother. My father and a younger sister caught the illness too, and had to spend years in sanatorium recuperating. We were not anti-German at home, but very sensitive to injustice and dictatorship.Which is probably part of why I ended up working in Kurdistan. 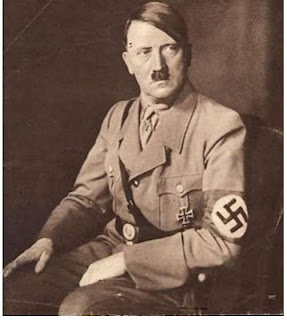 The swastika is the symbol of the German policy to erase those who were seen as not fit for this world. The Germans set the scale; they were the best, it was their Aryan blood that did the trick.Aryan, blond and blue eyes.There is another word I am slightly allergic to, and that is seen a lot in this region - more even in Iran:  I see it on the side of buses or on the fronts of shops. Being Aryan is here also considered being better.Why? Is it our blood that makes us better?

For Arabs, the matter should be more sensitive. Because on the German scale of those that were considered to be an 'Untermensch' - a human worth nothing, the opposite of the Aryan - the Semites were not too far from the Jews.

Yet even more important is that the Iraqi's understand the influence of Hitler, his ideology and his wars on their country. It was the Nazi influence that in the forties started the negative atmosphere concerning the Jews, who made up a considerable part of the inhabitants of Iraq. They lived here since 2800 years, and yet once the Nazi's started their nationalistic discourse on Iraq, it took them not even 10 years to leave. Driven by discrimination and fear, by the discourse that told everybody they were 'less', not real Iraqi's.

The story of how this came about is an interesting one, but too complicated to give due attention here. I found hardly anyone in Iraq who really knows it any more. When between 1948 and 1952 over 100.000 Jews left, that was painful for almost everybody in Iraq - and not as many nowadays think a victory. The Iraqi Jews had been the backbone of the economy, the bankers, the traders, the shopkeepers; they were good doctors and teachers. For many years, growth in Baghdad was mainly due to Jewish trade and knowledge. On top of that, they even brought Iraq its own modern day music in the thirties and forties. When things did not go well economically in the forties, the blame was put on the Jews - and only after they left it became clear what was the painful reality. 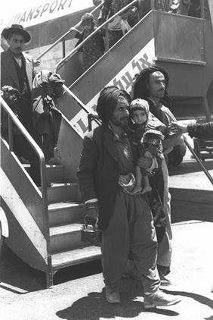 In Kurdistan, villages lost their soul when the Jews left. They were part of the fabric of the society. Many felt more Kurdish than Jewish. For that reason, up till now Kurdistan has descendants from Jews living here: from people who converted to Islam to able to stay in their own country. Still a connection exists between Iraq and the Jews in Israel - mostly through politicians, as Iraqi Jews in their new country also ended up in politics, but also through personal relations and through the families of the converts.


Picture of Jews from Kurdistan arriving in Israel

For that reason it is very hard for me to understand how people even dare to drive around with a swastika on their cars. And how they dare to declare in conversations with me that Hitler was a great guy. What do they teach in the schools in Kurdistan, I cannot help but wonder.

I ended  my earlier entry by wishing that Kurds will be better informed about the genocides others have been victim of. I want to extend that wish. I want to ask teachers in Kurdistan to be aware of their responsibility in the development of the country, and to act upon it. Tell the youth about the past in an honest and precise way, and give them a clear idea about the history of the world around us. So that they understand what certain behaviour may lead to, and so they may give this essential wisdom to their children. It is essential, because it can make the difference between developing the society, and just building houses, roads and wealth.

Swastika is ancient symbol before even Germans came to existence so Germans or any other people cannot ban it or have copyright on it. Besides, Dutch people were all partners with German in genociding the Jews, if you ask the same Kurds about Israel, they will say that they love it and feel connected in their struggle against the Arabs, so a swastika or anything else does not resemble an ill intention or anti-semtisim from Kurds, just ignorance. And like this is so sensitive for you, you should also be sensitive in your writings to Kurds suffer in Iraq, and not have a double standard regarding genocide or what fits your views.

Mohamed Ali, my entry is all about ignorance and the danger of it. Kurds do no longer suffer in Iraq, they are much better off than the rest. Now it's time to get rid of the ignorance too!

Judit Neurink- I appreciatie your investigative journalism but you yourself have been sheltered from the FACTS about Islam whose root is a bitter hatred against Jews / inbreeding is common ... so you see to " fight " the Ignorance of these Sunni Kurds you must realize this is like Trying to Convert Nazis to Judaism