It has been days since Erbils roads have been blocked. Police, often helped by security forces with their kalashnikovs at the ready, are making 'flying' checkpoints, all over the city . They check if cars with tinted windows have permission to be on the streets.

The KRG government has made a new rule, that for security reasons only those with a special permission can drive a car with windows that are not see through. The cars with dark windows are popular for a number of reasons. One is, that Iraqi Kurdistan is a place where people like to gossip. If a man drives in his car with an unknown woman, everybody who knows him will talk about that. It can be an innocent trip, but it can also be not so innocent, but the gossip will make it appear to be the latter.

This is the country where authorities demolish wooden stairs at a valuable archaeological site, just because a couple was caught there in the act. It seems that the campaign against tinted windows derives from the same culture of shame.

Another reason may be, that cars with tinted windows are often owned by rich people on high places, and therefore guards at checkpoint often wave them through without stopping them. Not only the rich want this treatment.

The new policy is not only giving police and security police plenty of work. It is also causing problems for leaders, who travel through the Kurdish lands in a convoy of cars with tinted windows. In this way any attacker cannot know which car is transporting the leader or high politician. It is said that the prime minister Barham Saleh has already had to change his cars, but president Massoud Barzani was seen recently getting into a car with tinted windows. 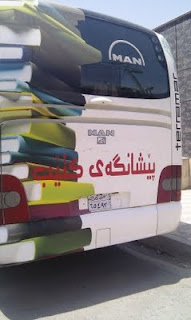 The new rule forces drivers to spend big amounts on changing their car windows. And it has made it impossible for a main publisher in Erbil to start using the library bus he had manufactured outside, to bring books to the people. Less and less Kurds in Iraq read, books get sold less, just like newspapers, and reading is not stimulated at the schools, which often do not have a (good) library.

Badran Habeeb, the owner of Aras Publishing and AK News in Erbil bought a bus and had it transformed into a library on wheels. The bus has shelves with books inside, and a couple of chairs for those who want to read a little before they choose their books. The first problems arose when Habeeb tried to transport the bus from Germany to Iraq, as many Arabic countries did not want a bus with 'Kurdistan' on the sides to pass, even though Iraqi Kurdistan now is a federal Iraqi state. It was held for weeks in Doha, then it was sent to Italy and from there it drove, partly covered, through Turkey to Kurdistan.

Once at the border, Habeeb found he was not allowed to bring it into the country because of the tinted windows. Which are strictly speaking not even tinted, as they are covered with pictures and ads to show what the bus is for. ,,They were going to break the windows!'' Habeeb says about the border police. He found an influential friend who helped him to get the bus to the Publishing House in Erbil. And there the 150.000 dollars worth 12 meters of bus are stuck now. 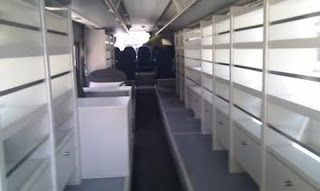 And yet he does not want to change the windows. ,,It's not only the cost. The sun is very bad for the books, and with normal glass the shelves will be visible from the outside.'' 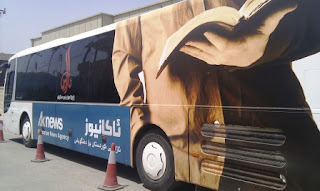 Habeeb is hoping for help, political or otherwise. With his bus more books should reach more people. But if he does not apply for number plates in the next two months, he will be fined heavily. Changing the windows, will cost him dearly. And then: what is against the present outside of his bus? Only policy which has gone beyond serving the people.
Posted by Judit Neurink at 7/16/2011