Being clear is not impolite

“The taxi driver did not want me to pay!” My foreign friend cannot understand what happened. He offered money at the end of the ride, and the driver did not take it.

“Did you offer it again?” I ask carefully.

How do you explain the complicated rule of Kurdish hospitality, where you have to refuse what has been offered, and can only accept it when the offer has been repeated, not once, twice but even three times? 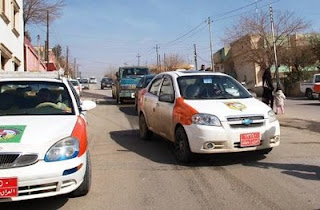 I know of cases, when foreigners who were ignorant of this rule, gladly accepted the free ride and got out of the taxi, only to be shouted at by the driver. This rule even applies for accepting a cup of tea, or a meal. Someone might invite you for dinner, yet does not really expect you to accept, and will repeat the offer: "You have to take a meal with us!" It sounds like he or she wants to convince you, and for some people this may be true. But the chances are the offer is made out of politeness.

And I myself, when I did not know the habits well yet, have accepted offers that I should have refused. What to do when someone offers you the jewellery or the jacket that you have just admired? Refuse, of course. But with our Western mind we think: well, if I like it, why should I refuse it? Or even: how can I refuse it? That would be impolite!

The whole notion of offering something, just to be polite, does not exist in our Western world. If you offer something, you want a person to have it. And you want him or her to accept. To refuse, could even be considered an offense – like: do you not like me, that you refuse what I want to give you?

Here we have a definite clash of civilizations. And Kurdish rules sometimes are hard to understand. Because at the same time that one should refuse an offer, it is impolite to say ‘no’. How often it happened to me that I asked for an appointment, or for support for the media center, or for the attendance of someone to an official something – and I would not get any reply. My email would go silent, as did my phone.

With my Western habits, I would repeat the request. Only to be met by more silence. Or people would agree to something, but in the follow-up I would hit the same wall of silence. It took me a while to understand. To avoid saying ‘no’, you just ignore the request. Is that polite – as politeness is so essential in the Kurdish culture?

To be honest: I find it very impolite. I’d rather be told to my face that something cannot happen, and preferably have an explanation why not, than being kept ‘on the leash’ – waiting for what? For nothing. Please do not waste my time: being clear does not have to mean you are not polite. It is quite the opposite!

Nice column! I should have known when I was there...
Wim Jansen

Good read! I can totally relate to the perspective of the author.

I would also be interested in columns on Middle Eastern perspectives on Western politeness :))