Kurdistan has stamps, so it exists

On my desk are two stamps. One for Kurdistan, one for Iraq. What is so special about them? Well - many things. First of all, the fact that they are on my desk.

In the beginning of my stay in Iraqi Kurdistan, one morning post from Holland landed on my desk. To my big surprise, because I did not think Iraq had a working postal service. The envelop contained an invitation, of which the date already had past some time ago. When I took a good look at the envelop, I found it had been posted about a month earlier, the address had been translated into Arabic and it had been stamped by Iraqi post.

Since then, occasionally a man with a clipboard would come into the office delivering post that had been sent from Europe, making us sign for the delivery. And without exception these letters would have been posted about a month earlier. 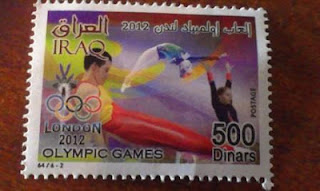 I assumed the postal system was working only in one direction - into Iraq. But then a traveler from the Netherlands took it upon himself to find Iraqi stamps. And in this search he also found a post office in Sulayamniya, that was also sending mail. How to send mail from outside the post office remained unclear, as there are no postboxes on the streets.

Not very journalistically I had assumed that the postal system was not working, as in this day and age of internet Iraq had made the same jump forward that it also has in other fields. For instance: no cable internet here - when I arrived first in 2003 I found that most internet was based on a satellite connection. When it snowed in Germany, we would have no internet in Iraqi Kurdistan - but after opening up in 2003 the area went straight for the newer solutions on the market for internet. Wireless was also normal, where in many countries you still had to hook up the computer with a wire to the network.

Yet I now realize my reasoning was not too solid, as until recently many Iraqi's hardly had an email address or hardly took the time to see what was sent to them that way. Only since the protests of 2011 Facebook has got a big following in Iraq - and mainly amongst the young.

Another reason to not really take any notice of the postal system was the fact that there are many alternatives to send post to and from Iraqi Kurdistan. Kurdish companies in the Netherlands, Germany and Great Britain have for years been sending goods to and from Kurdistan, for an euro per kilo. And since a couple of years also international transporters like DHL are active in Kurdistan.

This alternative system is also working on the transfer of money. In the beginning (2008 mainly) I had to get money transferred from Europe by person by plane, or by Western Union.That system still works, but  now the Iraqi and Kurdish banks also transfer money from outside the country. They are expensive, as banks in this country charge for everything - some of them even for keeping money on your account without moving it. 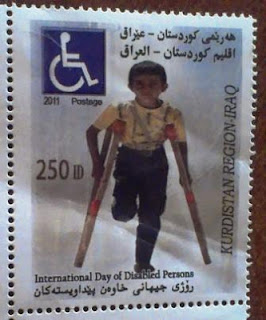 Next to the banks there is another, informal system. Bring the amount of money you want to transfer to a special office in the Netherlands, and without the money actually being transferred, even the same day you can collect the same amount from an office in Kurdistan.

Back to the stamps. How cheap they are: 250 and 500 dinar, which is not even 25 and 50 dollars cents. Who would be able to send mail for such a small an amount in the West?

What is  really special is that the Kurdistan Region of Iraq has its own stamps. And that they are sold next to the Iraqi ones. For all those that say or write to me: Kurdistan does not exist, now you see it does. Look at the side of this stamp. The proof is in the eating of the pudding: Kurdistan has its own stamps, so it exists. And so does postal service in Iraq. I apologize to all I have been informing incorrectly. But please do not send me any mail that way. It takes too long to reach me...

Hi, I googled and found your post. I really enjoyed reading the postal story about Iraq and Kurdistan Region Iraq stamps. I have been collecting postcards mailed from every country since 2006. I have a postcard mailed using Iraq stamp but do not have one mailed with Kurdistan Region stamp. Any chance you can help me :) Here is my postcard blog to see postcards I have received from Iraq using Iraq and military postal service. http://smspostcard.blogspot.com/search/label/Iraq

Hello, I am a stamp collector originally from Kurdistan. Do you know where I can buy Kurdish stamps from?