,,You work as an English teacher?'' The taxi driver nodded while he handed me the change of my 5000 dinars. ,,At the university'', he said. ,,Why would someone with your background want to drive a taxi?'' The middle aged driver smiled a bitter little smile. ,,I cannot live from the salary they pay me.Seven hundred dollars just is not enough.''

This is the story of Kurdistan. Here very many people have double jobs. Before the teacher I met a driver who did his taxi rides after his work as an engineer at the electricity department of the local government. Again, that did not pay him enough to feed his family, so he told me. I know of policemen and security men who for the same reason drive a taxi after work. 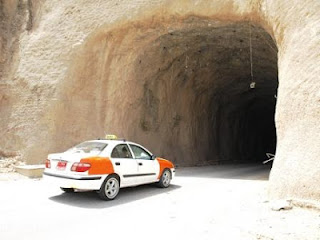 That must generate a good income, because Kurdistan does not have any public transport. If you want to go van A to B, you step into a taxi. There are taxi's you hail in the streets, there are shared taxi's between the towns. Driving a taxi is thus a very common job, also because there are hardly any requirements. Just a license for the taxi, no exams or other tests are needed.


But it not only taxi's. I have had staff that worked with the government in the morning, and came to work for me afterwards. I even had a candidate for a job who thought he could do it easily next to his full-time job with a company. Kurds seem to think it is normal to have two jobs.

The government is the biggest employer in the country. Over 75 percent of all the jobs are with the Kurdistan government. Government jobs are popular. Because you do not have to work hard - often people are just waiting behind a desk for the day to end - and that day is over at 2 PM. But the main reason is that the government is the only one providing employees with a pension. Government employees can apply for a long leave - because there is not enough work for all - and still get the pension. For that reason people are eager to get a government job.

But that job often does not pay enough for a family to live off. With rising prices - especially housing is expensive, but in general the prices have been rising over the past months - people need another income. Not a completely different job - as that would cost them the pension. Just extra income.

A friend of mine wrote an article in a local, English language paper, the Kurdish Globe, where he wrote that 'it rains money in Kurdistan'. He found that these double jobs ended people with incomes of 2500-3500 dollars a month - in a country where income tax does not exist. He even found a school teacher who also ran a mini-market and made a salary of 4000 dollars a month. The main quote in his article is that people say 'they live as kings'.

Yet while people have double incomes, they occupy a government job that is needed for the younger generation. One of the reasons behind the unrest of last year was the lack of jobs for the young. After that the government added thousands of jobs - leading to the offices full of civil servants who talk and gossip together with an eye on the clock, or to civil servants who add another unneeded check to an already too long procedure.

Kurdistan is booming. Restaurants are full, car parks are filled with new cars, many Kurdish living rooms are  changed yearly, the bazaar and the malls are buzzing. Yet many young people do not find work, many farmers and villagers cannot keep up with the financial boom.

Why keep government jobs that are not functional? Why not just make a national pension and use some of the money saved from the scrapping of jobs to create a stronger private sector? Why not give teachers, engineers and others that the government needs to keep a more realistic income and realistic working hours? And make sure farmers and villagers get paid well for an agricultural production, in stead of importing all the fruit and vegetables from outside?

The main reasons I can see is that governing parties need the jobs to keep their voters satisfied and tied to them, and that Iraq has a history as a socialist country. But that is an unpopular past - it is the story of the Baath regime. Another reason is the income from the oil - it does not force governments to make difficult decisions, even if a healthy fabric of the country needs them.

These are no easy decisions. But even before that, politicians need the courage to start the discussion. Because the boom of today is bound to end some day - perhaps even soon. Then all those thousands of extra civil servants will be sent home - without the backup of a healthy private sector and a thriving agriculture.
Posted by Judit Neurink at 10/05/2012