Wasting water as a national sport

The girl that is hosing down the street stops me from taking a picture of her. Because she does not want to be caught wasting water - or because she is afraid the picture might be misused? I am afraid it is because of the latter, as people in Iraq do not see wasting water as a crime. It's more of a national sport.

Wherever you go, what ever time of the day, you will find people in Iraq pouring water onto the streets. I suppose they see it as cleaning, getting rid of the dust. They stand and watch the water, chase some dirt, look around the street, and at the same time make sure the street is nice and wet. It is a favourite pastime for all; men in uniform or pyjama's, women wearing aprons or in a house dress and even children. During the summer, the winter and even after the rain, to chase away the mud. 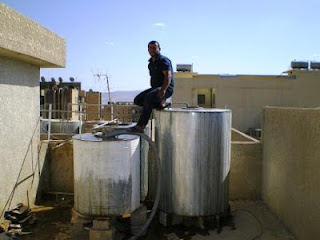 I was visiting a friend for a diner on his roof, when below us late at night one after another the neighbours came out with their hoses and started washing the streets. ,,The government knows this area is wasting water'', the friend told me. ,,Because of that, they only turn the water on late at night. Even so, after the water tanks are full again, everybody starts watering the street.''

Apart from the problem that they are emptying their water tanks - do they realize how much water they are wasting, and do they know that this is causing problems? Do they realize Kurdistan is using 770 liter water a day per person, where my country only uses 125 liters? I think most people are ignorant of this. Yet when you tell them they are wasting precious drinking water, they will not stop. If you ask cleaning ladies not to hose down the patio but use a bucket, they refuse.

I am from a country where water falls from the sky far too often, and yet I have been brought up with the knowledge that it takes a lot of work and money to clean water and make it suitable for drinking. Turn off the tap when you brush your teeth! Do not leave the water running! It's been so ingrained into my system, that I cringe inside when I see people walk away from a running tap.

Water is life. We all know, but in Iraq the message that goes with this knowledge has somehow got lost. Life is precious, so take care of it. And yet, in Iraq water is getting scarce. Because of dam projects in Turkey, Iran and Syria in the rivers that feed the Iraqi rivers (not only the main ones, Euphrates and Tigris, but also smaller ones) the water levels are much lower than years ago. Some winters the rains help to fill up the lakes and the rivers, but when this is insufficient the problems are huge.

Yet people are using water as if there are no problems at all. Municipalities plant greenery at the motorways and design parks for the families. All this uses tons of water, as often plants are chosen that do not originate from the region and need a lot of water. The water consumption in the summer is so high, that the deep wells that fill up during the winter dry up almost completely.

A couple years ago a Swedish organisation worked on one area near Erbil to put in water meters and educate the people about water scarcity. The water usage went down immediately. But one project is not enough. To make a real change, a  lot of education is needed for all Iraqi's from all ages - starting at the schools, but also for grown-ups.

In Duhok the authorities some time ago started prohibiting the washing of cars with a hose. That was a start, but the measure was not taken over by other authorities in Kurdistan, probably because it is difficult to implement. You need a very active police to check and persecute.

So I was happy to see last month on AKnews that ,,a campaign for warning the citizens against the consequences of wasting water and legal punishments for doing so will be launched soon in the Kurdistan Region.Water is a national wealth and it should not be protected, said Sirwan Baban,  the minister of Agriculture and Water Resources.''

,,Baban said for better controlling the waste of water by the citizens, the Ministry will assign water consumption calculators at houses soon.''

Interesting news. Now, I do not want to be only negative. The campaign and the water meters are a big step forward, punishment for wasting water too. But the plan to solve the problem by making more dams, is perhaps a bit short sighted. Because what happens to the river behind the dam, in the years that it fills? They will dry up. The water that is used to fill a lake, cannot be used for agriculture or drinking water. Do dams really solve water problems, or do they just create other problems elsewhere? And how about the land that will be flooded - agricultural land, historical land...? Many questions that need to be answered before dam projects can be started.

Let's start with the campaign, to make the people in Iraq realize how precious water is. To make them aware of the consequences of their behaviour, in the long run, for the future of Iraq. And let the government aim for a clear result: for instance to bring down the water consumption to a more acceptable level of, say, half of what it is now. Let's fight this disastrous national sport of wasting water!
Posted by Judit Neurink at 9/28/2012