The Anfal operation left many scars in Iraqi Kurdistan. Saddams operation to destroy the Kurdish villages and its habitants, and thus break the resistance of the fighters still has many effects, even though almost 25 years have passed since the end of it.

For those of my readers who do not know: during the seventies and the eighties thousands of villages were destroyed, in many cases chemical weapons were used and the inhabitants were driven out. Up to 180.000 people died, and only a few of those have been found in the mass graves in Southern Iraq. Women and children were relocated in collective towns.


Not long after Saddam was toppled in 2003, the rebuilding of the villages was started. Foreign aid organisations were asked to support a number of projects in order to turn back the clock. In some places the inhabitants returned and built new houses next to the ruins. 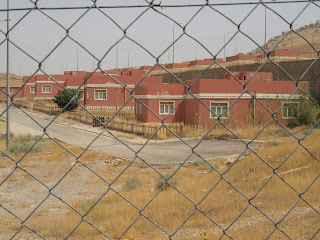 Not all villages were rebuilt, because not all the inhabitants were interested in returning. Some had got too used to the city life, some did not want to live far from hospitals and schools, some did not fancy the tough life of a farmer any more and for some the memories of what happened during Anfal were too painful to even consider going back to the scene of it.

And there are other reasons too, as I found when I visited the Barzan region and went to see the unfinished Bekhme Dam. In a village near the dam project I passed a group of new, modern and brightly coloured houses, clearly the result of a project to rebuild the village. But instead of a lively village with people and cattle, it was a ghost town. Although all the houses were completely finished - they even had curtains covering the windows - none of them was inhabited.

A woman from a nearby house that was built in a more traditional way, told me that indeed nobody was living in the houses. “A company came to build them in 2005, and after that nothing happened”, she summarized. Why? People simply did not like them.

The around hundred houses are built very near to each other, and they lack the garden and the wall around them that houses in Kurdish villages usually have. They were more fit for a town than for a village. Did they perhaps not fit in the mountain climate - too hot in the summer, too cold in the winter? Could it be that a company built them, without asking the villagers if the design fitted their needs? How much money is wasted, by building something that is not used? Does the foreign donor know this?

Yet who-ever made the planning for the village did try hard to accommodate villagers coming back from the towns. He gave them even a little health centre, so long trips to a hospital in a town will not be needed. 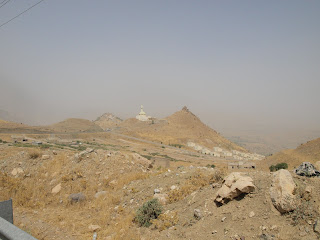 The village has another feature. It is split by a hill, which is topped by a mosque, that is visible a long way of, from the other side of the valley. But again, the mosque is not in use. It does not even carry the usual inscriptions about who it is dedicated to. The mosque was built by Saddam, the guards outside told us, in 1987, at the hight (height) of the Anfal operation. It was part of his campaign to Arabise (Arab-ize) the area. Now that Saddam is gone, no-one (no one) wants to use the mosque. The gate is looked (locked) with a chain and a padlock. The villagers are even building a small new one nearby.

Strangely enough, on the other side of the village some of the around (nearly) 40 new houses there are in use, even though they are built to the same design as the other ones. The satellite dishes on the roofs vouch for their habitation. Why did villagers agree to come and live here, and not on the other side of the hill? Perhaps because the original village was on this side? Yet in its place army barracks were built, in use by Saddams army for a number of years. Did his soldiers perhaps use the mosque?

Surely there is no connection to the dam project, that was stopped in 1991 after the Kurdish uprising. The project was very much opposed by the Barzani family, as it would have drowned their village and the whole Barzan area. The company that built the houses would not have done so, if anyone was still considering the possibility of the land being swallowed by water. Also, I have the impression the village is on a high enough level to be safe from the water.

I start to wonder what happened in other projects for Anfal villages. Were the villagers better informed, did the designers listen better to their needs? Was any research done if the villagers would indeed be returning, if they could be persuaded to leave their lives in the towns? How many projects are like the one in Bekhme? Or is the one in Bekhme unique? I invite anyone who knows, to leave a reaction below!

These reactions reached me from outside this blog:

"I guess such operations were deeply effected those people whose their villages was destroyed without a reason, Hope to not repeat such things in the future and to let Iraq be under the control of the new world system politically and economically Thanks for your kind effort Cheers, Ahmed Fouad,"