Civil action does have results! That is the good news from Iraq. Protests against traffic signs have resulted in the signs being changed.

It might appear as a small matter, but for nation building it is not. Kurdish civilians in Kirkuk and the border regions of Iraqi Kurdistan protested against the fact that traffic signs were only in Arabic and English, and not in the Kurdish language of most of the people living in that area. The graffiti they used to show their feelings made the signs even unusable. Most of them were then removed. 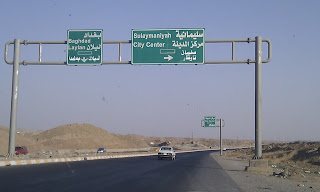 That was over six months ago. I weekly drive the road between Sulaymaniya and Erbil, and I was pleasantly surprised when I saw this. English and Arabic, and Kurdish added on the bottom.

Yes! I said to my driver. It worked! Some signs were new, some adapted, but now all of the main road through the area near Kirkuk where Kurds are in the majority is covered by traffic signs that also read Kurdish.

My driver was so happy that he stopped for me to make the picture. Language is a political issue in this region, as the Kurds are in conflict with Baghdad over who is in charge in these disputed area's. And now at least the fact that the majority is Kurdish is mirrored in the traffic signs.

To make it more complicated; I do not know what happened in disputed areas where the Kurdish dialect is not the main one of the government, the Sorani. Did they use the Badini there?

Yet the matter is a bigger one. It shows that also in Iraq it pays to show your disapproval. The voice of the people is indeed heard. This is a step forward in the development of the democracy. And that is worth to be noticed.
Posted by Judit Neurink at 8/24/2012