,,At least ten times they took all my finger prints!'' Khaled Suleiman, the former editor in chief of a Kurdish magazine spreads his hands in disgust. ,,As if I am a criminal! While the files that we published are real, and the authorities have confirmed that.'' 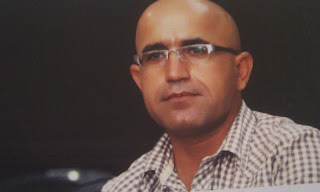 My editor friend is harassed by the police and the court, for publishing an article about corruption. The magazine that he lead for a year, Haftana, showed evidence that a number of people in Sulaymaniya were given two bits of land, while they had the right as civil servants to have only one. The documents they published came from the Institute for Financial Control and speak for themselves.

Yet some of the people who's names were there, went to the police to complain about libel. Since then, Khaled Suleiman has at least on 15 occasions been called to the police station.Even though the article was published (in August 2010) in the first magazine published with his name on it as editor in chief - while he had not seen or edited any of the articles as it was already finalized when he started on his first working day. And even though Haftana ceased to exist in August 2011, when then PM Barham Salah stopped financing it.

The article published 58 names of people who were registered as having received two plots of land. Civil servants in Iraq are often rewarded with bits of land, which they can use but for a number of years not sell. Usually there is one plot of land per person. The Haftana article showed that some people were given more plots than the one they were entitled to. Of the 58 people implicated in the article, around a dozen demanded damages for the libel imposed on them. Yet the head of the Sulaymaniya Municipality has confirmed that the documents used in the magazine are copies of real, existing documents. 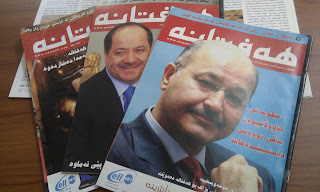 Suleiman is by far not the only one editor in chief in Kurdistan who is in and out of the police stations and the court. Some others told me they are there just about weekly. Sometimes cases are based on realistic complaints, but too often they amount to harassment of the media. Sometimes because the complaints are made by those who have strong ties within the party, and judges (who are all member of the ruling parties in their region) feel they have no freedom to rule against them. Suleiman was even told by one of the judges that he 'had no choice', even though he 'did not like it' to rule against him.

A problem is also that the cases are tied to the editor in chief personally. So Suleiman still has to report in court, even though his job with the magazine ended almost a year ago. Editors in chief who moved to other positions, still get called for complaints issued during their term.

The Kurdish authorities say they are fighting corruption. Yet when media publish about it, the messengers - the journalists who find the evidence and write about it - get shot. It would be more effective to use those bullets for the culprits, those involved in corruption, as a way to really fight the problem that is giving Kurdistan increasingly a bad name, inside and outside its borders.