,,Can you bring me some spray for my numberplate'', one of my regular drivers asked me last time I went to Europe. Spray? ,,To make sure the police camera's cannot catch me when I am driving too fast.''

I thought he was joking, but found since then that a spray does exist that makes the number plate shiny, so the camera gets blinded. How does a driver in Iraqi Kurdistan, which has been isolated for so long know this? I suppose that after a number of fines he asked around and was given this solution by Kurds who have lived in Europe. 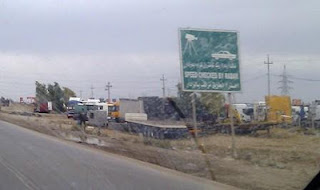 Fact is, that the police in Iraqi Kurdistan have started to check on speeding. And that is an important task, in a country where cars are big, fast and meant to show off. It's funny that in this country where every process seems to be slow, driving has to be fast. Everybody is always overtaking, there is a lot of hooting at trafic lights even before they turn green, everybody drives too fast inside cities and even more outside. On roads that in Europe would be 80 km roads, most people drive between 100 and 140 km/ph.

Sometimes this is really scary. Because of all those who overtake when there is no space, the almost accidents, the cars that overturn in too hastily taken corners or skid on soft road sides. But nobody seems to really care. Many people drive without a driving licence, and even worse: without driving lessons. Licenses were not handed out for many years after Kurdistan became autonomous, and even now a driving test only requires you to show you can handle a car. The rules attached to driving seem to be hardly know.

Trafic in Iraq is a disaster. Nobody uses a mirror, nobody is interested in what happens on the road behind. One can compare driving in Iraqi Kurdistan with the times that people only had donkeys for transport. You can overtake on a mountain path, you can push the other donkey off the path - the damage will not be too serious.It is of course a very different matter with cars.

Authorities in Kurdistan have caught on. They imported camera's and put a police teams manning them on those spots where the driving is the most dangerous. A lot of drivers have been fined. But there is a big problem. The teams do not change from position very often, and there are warning signs everywhere. So after a while, everybody knows where to brake not to be fined, and hits the gas again afterwards. The teams are quite visible. 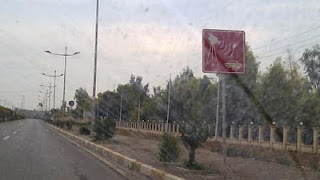 In this situation you do not really need the spray the driver asked for. You just need to watch out and put on the brakes in time.

Nothing changes, also. People just complain about the fine, they do not change their habits. Because there is no campaign that at the same time explains why the camera's are there, why cars should slow down, what bad driving leads to.

And also very important: nobody seems to be pointing out that alcohol and traffic are a very dangerous combination. When two receptionists of a hotel in Sulaymaniya get killed because of a drunken driver hitting their car at night time, everybody is angry and sad - but it does not keep anyone from stepping behind the wheel after drinking. Many hit the road even after more than a quarter bottle of whiskey.

Influence from the West is found in the fact that western companies sold the camera's and probably trained the policemen. But who is going to train the people?Who will educate them to drive in a better way, to stick to the rules and to avoid the dangerous combination of drinking en driving?
Posted by Judit Neurink at 11/05/2011