The roof has caved in, as have parts of the walls. Stones are the most prominent feature here at the end of Al Qosh oldest quarters. Yet inside is the tomb of what was for ages a worshipped prophet, the Jewish prophet Nahum, who is a Saint for some of the Eastern Christians. 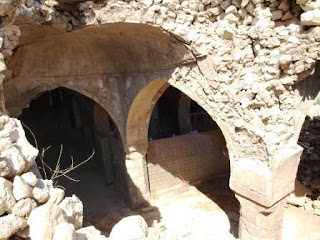 The place is Al Qosh, a Christian village some 50 km from Mosul, in a region that is now under Kurdish rule, although it is officially not part of the Kurdistan Region of Iraq. The time is September 2011, eight years after Saddams rule ended - an important moment in time for Al Qosh, as it was isolated under the former Iraqi ruler because of the large number of communists living in the village.The isolation is probably the reason why on the one hand there are still so many old buildings, and on the other why so little has been done to save them from the destructive hand of time.

Walking through Al Qosh one is confronted with much older history. The town goes  back to 800 BC, and has been the domain of Christians for many centuries. It has seen much in its time. Fights, wars, the demise of the Assyrian Kingdom. For one: Nahum was a descendent of Jews forcedly brought to what now is Iraq, by the Assyrians in the 8th and 9th century BC. He preached in the area between 726-697 BC, and was buried in Al Qosh.

It is hard to imagine that this ruin before 1948 was the centre of worship for Jews from all over Iraq, and that the caved in walls around it were part of the synagogue build around it.After most of the Jews left Iraq in the forties and fifties of the last century, it became more and more derelict. While old churches and cloisters in Al Qosh were repaired and looked after, this Jewish place of worship slowly fell apart. 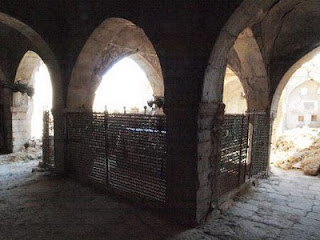 When you climb over the heaps of old stones that once made the walls and roof, you will still find the grave inside. It seems someone is still caring, as when I saw it it was covered, and protected by metal gates around it.

The inhabitants of Al Qosh know its there, but do not seem to realise how special the place is - they  call Nahum the brother of Rachel. History tells me he was the prophet who wrote the Book of Nahum (one of the minor books of the Bible) and who predicted the downfall of the Assyrian Kingdom and its capital Nineveh.

Since most of the Jews left Iraq, most of the traces of their century long presence have gone too. Synagoges became mosques or were just torn down to be replaced by houses. Jewish quarters still exist in name, but many of the original buildings have gone. This makes the pile of stones in Al Qosh even more special.

Wikipedia tells me that ,,When all Jews were compelled to flee Alqosh in 1948, the iron keys to the tomb were handed to a Chaldean man by the name of Sami Jajouhana. Few Jews visit the historic site, yet Jajouhana continues to keep the promise he made with his Jewish friends, and looks after the tomb. A team of US/UK construction engineers, led by Huw Thomas, is currently planning ways to save the building and the tomb.Money has been allocated for proposed renovation in 2008.'' 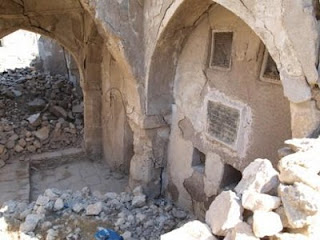 What came of those plans? The plaque in the wall near the grave seems news, the wire enclosement around  the grave too, but otherwise the place is a mess.

I visited Cordoba recently, and the only synagogue in the town that survived the Spanish Inquisition. Very well preserved, as was the Jewish Museum across the road. Seeing that the Jews are very much part of the past of Iraq, could something like not be done in Al Qosh?

Of course, in Cordoba Israel was behind the reconstruction work. For Iraq, that would seem problematic. Still, there is talk of good relations between the ruling Barzani family in Iraqi Kurdistan and Israel. The village of Barzan, the home of the Barzani tribe, is know to also have been the home of many Jews before 1948. 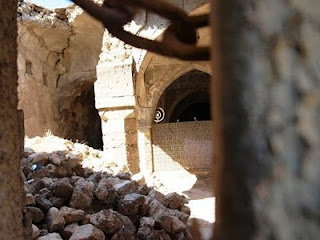 Iraq should start to realise that national heritage is part of the history of its people. And that a country without a history, cannot survive. Next to building roads and buildings, the heritage should be preserved.

And the simple fact is, that the Jewish heritage in Iraq is part of that national heritage.