Politician could be behind attack on Asos Hardi

It was the massive outcry, Asos Hardi knows for sure, that lead to the capture of the driver of the get-away car of his attacker. And that lead to the arrest of the person who gave the order for the attack.

Hardi, who is seen as the Nestor of Kurdish independent journalism, was wounded in an attack outside his newspaper Awene on August 29. He was hit over the head and needed 32 stitches. The incident upset colleagues and organisations in and outside Kurdistan, who called on the government to condemn the attack and find the attacker. 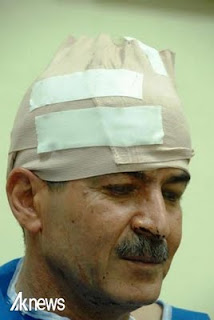 Kurdish colleagues told me that the attack really affected them. There have been many incidents involving journalists in the past months, but the fact that Hardi was attacked made them feel insecure. If even a man as respected as Asos Hardi was the victim, than where would the violence stop?

Both the Kurdish Prime Minister Barham Saleh and the Iraqi president Jalal Talabani answered the calls by condemning the attack. The result was the formation of two commissions, which succeeded in finding the driver of the car that stood waiting for the attacker. The man spilled the beans.

Soon after the attack, Asos Hardi went to court to file a complaint against a member of the PUK leadership, Omar Fattah for masterminding the attack. Awene had published a report about corruption in the week leading to the attack indicating the guilt of the PUK-topman and former Kurdish Prime Minister, and Hardi was convinced there was a link to his attack. Earlier reporting had lead to a feud between Hardi and Fattah, which forced Hardi to spend many hours in police stations and courtrooms to clear his name and the newspapers'.

After the driver in the Hardi attack was picked up and started mentioning names, the right hand of Omar Fattah reported to the police and was subsequently arrested. The journalist community in Kurdistan of course now is eagerly waiting for the next steps. What will happen to the politician who has been mentioned in many reports about corruption, as they tell me, but who was never persecuted?

Yet just over a week after the attack on Hardi, another editor in chief reports to have been kidnapted by security police, kept for three hours and then released by a judge. Ahmed Mira of the political gossip magazine Lveen says men in the military uniform of special forces stormed his office, kicked him and threw him in a car. He says he was insulted by police at the police station where he was kept until the judge ordered him freed, and he filed a complaint both against the policemen and the security forces.

The ruling KDP and the assaish (special forces) in Sulaymaniya denied any knowledge of this incident. The assaish even filed a defamation suit against Mira for the report on the Lveen website about the incident.

Asos Hardi reminds me that the Kurdish president Massoud Barzani only 48 hours before the attack on him had used the end of Ramadan to strongly denounce illegal attacks on activists and journalists in Iraqi Kurdistan. ,,The attack on me was really a direct insult for the president,'' Hardi thinks. That might explain the prompt reaction, and the consequent arrests.

Hardi's attacker still is on the run. And journalists are watching closely to see what happens in this case, because of its implications for their own future safety and for the press freedom in Kurdistan.
Posted by Judit Neurink at 9/08/2011

Wow! It sure looks like a political thriller! a kind of All the President's Men' or 'Three days of Condor',