The lady of the Security Office takes an USB stick from my bag. She finds my phone and confiscates that too. I protest. I need it, people will be phoning me and I need to go on with my work. Why should I not use the time I am forced to wait in the residency office for work? The lady will not be convinced.

,,If I wore a suit and tie, you would not dare to’’, I say, knowing this to be the truth. Of course she denies, and searches again through my private property. Just to pester me and show her power. Privacy; it is something Kurdistan will have to wake up to. That USB stick has private and office information; it should not be lying in a cupboard at a residency office for anyone to steal it or borrow it for a quick look.

If this would happen in my own country, Holland, the outcry would be enormous. As for phones: the same. Why take phones off people if you can just as well tell them to put it on silent? I think I know the answer: because in this country there are too many people who do not know how to handle power.

Let us look at the policy behind taking peoples phones in public offices. I understand the staff does not want the harassment of someone answering the phone instead of their questions. I cannot think of any safety reasons. But if you do not educate people how to use their phones in public places, this will never change and people will keep talking to their phones instead of to the people in front of them. Offices may ask their customers to put phones on silent, or even switch them off. But to confiscate them before entering is in violation with the privacy of the owner of the phone. 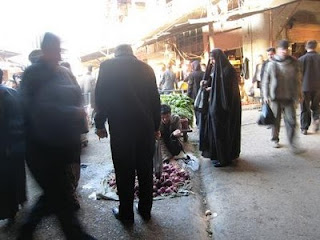 ,,Ah, they do not even know what privacy is’’, say some Kurdish friends who have lived in the West. And I guess they are right. Questions about parents, brothers and sisters in the residency office convinced me, as did the question about my religion (so what? And what if I am a Moslem converted to Christianity?) and my personal status (why does the state need to know if a foreigner who did not bring his family is married?) – and all that in open offices, where anyone can hear the outcome. And even more so the blood test the Kurdish authorities demand of foreigners. Medical records are private, the State has no right to them. This is a human right that is violated constantly in Iraq.

Even medical doctors have a problem with privacy. How can they treat patients while there are other patients waiting and listening in the same room? Do even they not understand that medical information is private, and that patients have the right to be treated without others knowing what is wrong with them?

I understand why guards in checkpoints want to check cars – it is their job to keep Kurdistan safe. But can’t they see the difference between a terrorist and a blond woman from abroad? Does the fact that one is not Kurdish automatically mean one is loaded with explosives, or may want to murder the leader? Is this just bad training, or is Kurdistan really packed with little copies of the former ruler?

Privacy is an expensive commodity in a country where people live on gossip. This goes for the media as well. Journalists in Kurdistan think too lightly about writing all kind of information about public figures. They should think before they write: what harm does the publication do, and is the news really worth that? Of course public figures are owned by the public, but that still means that there should be a very good reason to invade somebody’s privacy.

The problem is mentality and education. The government should protect its people, and teach them about privacy instead of violating it themselves. It should develop and implement laws to protect the privacy of its civilians. Kurds have just as much right to their own private lives as anyone in the West, where such rules and regulations do exist.