A day in the life of a journalist in Kurdistan

Iraq is a country with many stories, a Valhalla for journalists. The stories are there to grab, often right in front of you. But not always. And if stories need organizing, the trouble starts.

I went to make a story about Syrian Kurds who come to Iraqi Kurdistan to smuggle petrol and food back to their families, towns and villages. Because of the war, goods have become rare and expensive in Syria. Men walk for hours through the mountains and load themselves with jerrycans of petrol and bags of flour, meat and cigarettes on the way back.

A beautiful story that was pictured by my Kurdish photographer colleague Aram Karim for Metrography. I decided to go and make the story in words. 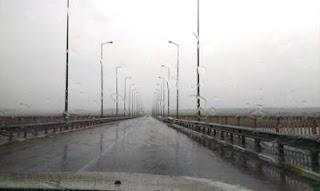 That was easier said than done. The smuggle route ends in Shilikiya, a village at the three-country-point in Iraqi Kurdistan, where Turkey, Syria and Iraq meet. The area is outside the Kurdistan Region, but is under the control of the Kurds. You have to cross the bridge over the river Khabour, or Habor, which has a Kurdish checkpoint that acts as the border crossing to Syria.

I decided not to drive myself, but ask the young taxi driver Serdar to take me. He's very interested in journalism, and fun to be with. As he is also taking colleagues to the Syrian refugee camp of Domiz, near Duhok, he has some good contacts. I found some myself as well, through my Kurdish network. We phoned the police chief in the area who made sure his men knew about our trip, and then the office of the governor of Duhok, as that is the administration for the area we were going to.

I was told to pass by the governor's office in Duhok for a letter to show to the checkpoints who we are and what we are doing. So the morning started at six, leaving from Erbil to Duhok reaching there just before nine. At half past nine we left the office with the letter - which is a record in Kurdish administration, thanks to the help of an old friend (thanks!!). Without him, I am sure, it would have taken much longer. Then we set out for Silikiya, in the ever-increasing heavy rain. 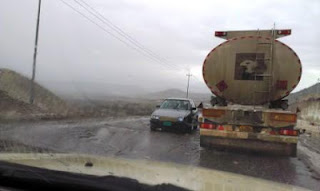 Roads in Kurdistan can be good, if repaired recently, or very bad when used by heavy traffic and been patched over too often. The road towards the Syrian border, which is partly the old road to the Iraqi/Turkish border point Zakho, is of the last category. Serdar had to keep his eyes on the road not to drive into one of the many potholes in the road or bump into one of the cars or lorries trying to avoid them.

The old friend in Duhok, who is from the area we were heading for, made us a map that we followed as good as possible, as signposts are rare in this region. We arrived at the bridge over the Khabour, presented our letter at the checkpoint and were very happy to have made the detour. Without it we would not have been able to pass. Now we were treated with all the regards of honored guests.

At the checkpoint they asked us to make a copy of the letter and deposit that to them on the way back, which we did. It seemed they did not have a copy machine, or did not want to copy our details down by hand as is usually done. Surprisingly enough we found a copy shop in the next village.

We found the village and the smugglers (my story about them is to be published in Trouw and De Standaard). They were all soaking wet from the rain and the streams they had to cross, and with mud all over them. Some had donkeys for their stuff but most were carrying it by themselves. I ventured out of the car to accompany them a little, but soon found the weather far too bad for participating journalism. It seems I had chosen the worst day in the year to do this.

While talking to them in the village, a well-dressed gentleman appeared and asked what I was doing there. He was member of the assaish, the Kurdish security police, dressed in civilian clothes. I was a bit taken aback, as press freedom is settled in the Iraqi constitution and accepted by the Kurdish parliament and leadership. I handed him our precious letter from the governor's office, after which he changed his tune. 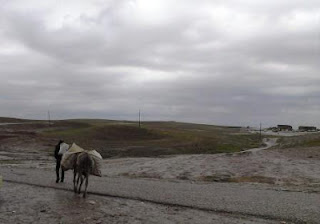 What surprised me is that he did not act in any way against the smugglers, even though they were in Kurdistan illegally, as they has crossed the border without any documentation. The smugglers were accepted, but a journalist making a story was not. But what bothered me most is that his behavior reminded me of the security police of the former Iraqi regime.

For that reason I was happy to find another member of assaish who wanted to fill us in on some details. He had finished his work - he registered the refugees arriving from Syria and the weather kept them away today - and had just started his car. He was driving a taxi. Serdar and I were invited to join him in the car. It was strange to interview someone of the security police from the backseat of a taxi. We were interrupted by phone calls and people outside who needed his advice, but did get some essential information.

We got back some 13 hours after we started off. The car was muddy, inside and out, my clothes were too and I had to put my shoes under the tap to clean off the mud. But I was happy and content. A day well spent, back with a good story and we survived the terrible roads. Just another day in the life of a journalist in Iraqi Kurdistan.