Kurdistan stops when it snows

The TV news shows university students playing in the snow on Azmar, the mountain above Sulaymaniya. Snow balls are flying. 'Zohr gosha', they all shout at the reporter - great! I zap to another channel, and see more or less the same images: boys and girls are enjoying themselves in the winter scene.

Friends put pictures on Facebook of the wintery scene in their gardens, of the family playing in the snow. Snow is fun, is the message. 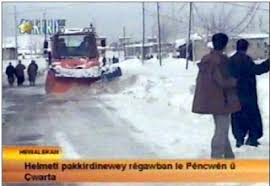 In Iraqi Kurdistan people like snow, just like they like the rain. Yet the country is quite unprepared for both - even though it does rain and snow every year. The same TV news has just spent most of the bulletin time showing the chaos on the Kurdish roads, cars that got stuck, accidents that happened because the roads hardly get cleaned. Some shovels are out, pushing the snow to the side, which is all the authorities use in the fight to keep the roads free and clear.

Salt to clean the ice and snow away? Never heard of it. I remember that in one of my first years in Kurdistan I brought kitchen salt to clean the icy entrance to the office, and my staff was really watching in awe.Does that work? Yes it does, we use it all over Europe to clean our roads.

And then: what do you do with your car when it is snowed in? In Europe we have all kinds of gadgets that help us clean the windows and lamps. You have to, to be safe out there. And of course you have your gloves and warm clothes to make sure you do not freeze while doing this job. Yet in Kurdistan, I hardly see gloves, nor gadgets for car cleaning. Cars just venture out on the roads with the wipers only having cleaned some of the windows, but with hardly any side view and their headlights still covered.

When it rains, it rains heavily, and roads get flooded, tunnels become swimming pools and big puddles make driving a dangerous hobby. The media report about it, people complain, yet every time it rains the same happens.

The consequence is, that when it rains or snows, the economy stops. Kurdistan is the gate to Iraq and it has become a consumption economy - and lots of lorries bringing in goods use the roads every day. Yet when the snow is blocking the roads, all this stops. When the rain floods the roads, all is delayed. That is money, that means shops and customers not getting their products, that is sales not happening - that is dollars and euro's and dinars being lost.

The TV-news shows images of snowed in trucks near the border of Haj Omran, on the road to Iran. The reporter tells us the snow has reached to a meter and a half. How he got there is not clear, as the road is clearly not fit for driving. Bulldozers are used to pull out some of the local trucks, but the big international lorries are abandoned and covered with snow. 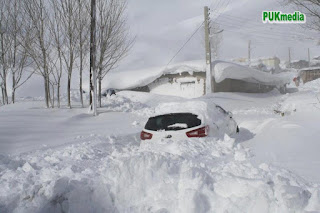 I had an appointment on the day it snowed around Sulaymaniya, which had to be canceled because the roads were too slippery and dangerous. I am sure I was not the only one who had to stay put that day. I wanted to go out on a story, but that had to be postponed until the roads are clear again. I mind and fret about it, but many Kurds don't, they are happy to have an excuse to stay home.

And then the accidents, in a country where nobody has any car insurance. It is bad enough when it snows in Europe, but there at least you know you will get financial help with the repairs if you drive into the side of a slippery bridge. There will be a service you can phone to get your car towed away, and yourself transported to a warmer place. Here there is no such security. You just leave your car until the snow is melted.

I feel sorry for the guards at the check points, who are already into wearing ear warmers when the temperature drops to about 10 degrees. How do they manage when it snows, and freezes? Which brings me to the heating, in a country where air conditioners in the winter are turned into heaters. When everybody puts them on - and on 31 degrees - it costs a lot of electricity. And that leads to electricity failures, so people sitting in the cold or around smelly and extremely unhealthy kerosene fires. 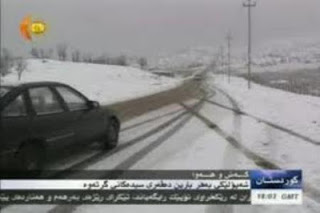 Kurdistan has in the past few years changed enormously, but this did not follow the change. The concept of the economy having to keep moving to keep healthy, even in bad weather, has not caught on yet. But at the same time, a healthy economy has become more and more important for more and more people who live off the income from trade and investments.

Moving forward means for the Kurdish authorities to recognize the problem and work on a policy to solve it. I know this winter we will have to accept the consequences of the cold, the rain and the snow. But please, let the change also reach here. To keep people warm and safe, and keep the economy running in the winter.