Who needs a phone when the summit is on!

Life came to a standstill for a couple of days in Baghdad. Banks did not transfer money, people did not go to work, and worst of all: no mobile phone networks were available. Not just for an hour or a part of the day, for two whole days, for fear of terrorism.

So fears of terrorism deprive citizens of Iraq of their most essential rights. The Arab League meeting was to blame for this. Arab heads of state and presidents came to Baghdad to meet in the Green Zone. A hundred helicopters were in the air to monitor their safety, thousands of troops were on full alert. Part of the town was put under a curfew. And on top of that mobile telephone networks were cut. The move is part of a security plan approved by the Office of the Commander General of the armed forces. 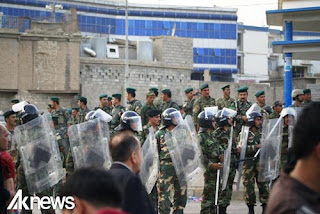 Even though Iraqi parliament members protested against it, the Iraqi Ministry of Internal Affairs decided to cut all mobile telephone traffic to make sure terrorists would have no possibility to communicate about the execution of any plans concerning the summit.

In Iraq we are used to not being able to use our mobiles at times. When an American military convoy used to pass you on the road, the mobile phone would go dead. When you pass certain government or military buildings in Baghdad, the same happens. We put up with it, understanding the security reasons behind it.

But now the circus of the Arab League came to town.You'd expect extra security, because Baghdad wanted to show the world how safe a place it really is - while the whole world still sees on the TV networks the deadly explosions that target random Baghdadi's. You'd expect that some mobile phone traffic will be cut, at some times. You'd even expect your phone to be tapped to make sure any plans for attacks can be foiled.

But in stead, no phone coverage at all. Just imagine. Little Ahmed falls down the stairs and needs to be taken to hospital. Who to contact, and how? Pregnant Fatima has started her labour, who to contact and how to make sure she gets help in time? And another, almost daily occurrence: a bomb explodes in your street. You can see the dead and injured, and want to contact the police and get ambulances to take care of the wounded. How?

Because of all the violence, Iraqi's are addicted to their mobile phones. 'Did you get to school/home/your friend safely?' is one of the questions you may hear frequently. 'No problems at the checkpoint?' or 'What is taking you so long?' People need to check on each other to make sure nothing has happened. And especially when they hear about an attack, they will grab the phone and inform about the well being of their beloved ones.

Let's not even calculate the cost of all the bank traffic that was not possible because of the networks being cut, or the business transactions that could not be finalized for the same reason. And let us forget about the increase of the prices of food because of the summit and the curfews (tomatoes tripled to 6000 dinar per kilo). Let's just stay with the fact that politicians in power in Iraq feel  that their foreign guests are more important than the people who put them in charge by voting for them in the first place.

Just listen to Prime Minister Al Maliki's speech after the Arab summit. ,,The government is serious in moving towards building projects for the rehabilitation of infrastructure and providing necessary services for citizens'', he said. But not during visits of foreign heads of state, who's safety goes far beyond the well being of the citizens in Baghdad. And worst of all: all those measures did not even keep terrorists from staging bomb attacks. It might even have made it even more interesting for them to show that they were still capable to...

How did the Arab leaders communicate? Not by phones it seems......