Don't get ill in Iraq

Getting ill - don't do it in Iraq. The Iraqi physicians that once were welcomed all over the world for they knowledge and skills, are no longer available. Either they left the country, and did not return, or they have retired. And they are badly missed: healthcare in Iraq of today is a disaster.

A Dutch friend who is specialised in internal medicine already brought the message home, a couple of years ago. She saw the books that medical students at the universities in Kurdistan are using. ,,Those books are years old, they mention medicines as being developed that have been in the market for ages'', she told me. She went to a meeting with Kurdish specialists who watched on a big screen an operation that was taking place elsewhere in the same building. The surgeon who was conducting the operation joined them for a while. When he went back into the operating theatre to finish the job, he did so without scrubbing again or changing his clothes. 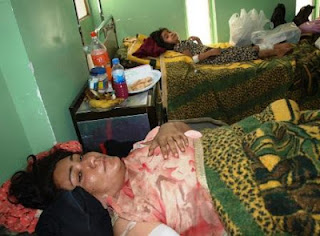 What is wrong with the medical profession in Iraq? It's not only outdated education. It is also the fact that doctors here think they know it all, once they finished their study. Keeping up with the developments outside by reading about them - as doctors do elsewhere in the world - hardly is done. The education system is to blame: young people who score well in high school are allowed to become medical doctors. It is the points they have scored that count, not their state of mind - if  they care about and want to heal people.

The result is clear and rather disastrous: medical doctors who cannot make a secure diagnosis, patients who shop around because they do not trust their doctors. At the same time, Kurdistan does not have family doctors. Patients who need care, go to the first aid post in the hospital. Hospitals are old and dirty, and do not offer much in care: there are hardly enough nurses and family members have to take care of patients.

Yet medical doctors who had their education abroad and return, have problems finding a job. Or they have problems doing the work for which they were educated. Because the older doctors who did not update their knowledge, eye them with contempt. The newcomer knows more, is better educated, and if given the chance might badly dent their status. In stead of thinking of how patients can profit, it is all about keeping their position and making sure these clever newcomers cannot become a threat.

Patients are discharged even though treatment has not been finished. Every so often you will meet people who still have the tube for a drip in their hand - sent out, sometimes even back to work. Driving their taxi, washing dishes - not realising that the tube can be the cause of an infection. I have seen people pushed around in wheelchairs and into air-planes who were too ill to move - who should not be out of their sickbed.Often their family members got so disgusted with the bad care that they decided to take the patient to a hospital in Iran, Jordan or Turkey, where they know the care is better.

In Sulaymaniya the biggest businessman in town is in the process of building a professional hospital, with care on an European level. Because of the low level of education in Kurdistan, part of the plan is to train all the staff in Europe before the hospital will be opened.

Bad healthcare can be deadly. In only a few weeks time a number of my staff members were confronted with that tragic fact. Two of their family members involved died after a stroke that did not get the care it deserved. Mistake was followed by mistake. They mourn the loss of a beloved one, knowing that he/she could have been saved, if only good healthcare was available.

Yet medical staff in Iraq hardly gets punished for their mistakes. Kurds know why - and even if it is not true the fact that they speak about this so openly shows how bad the situation is. They say that the special medical council which has to decide about punishment for doctors making mistakes hardly ever does so, because colleagues are keeping each other out of the wind.'If you wash my hands now, I will wash yours later', is the concept.

One of the problems in medical care in Iraq is that not enough hands get washed. That to many doctors care more about their income and status than about their patients. That the government does not have a good policy to make sure healthcare is up to standard. But then: what can you expect in a country where the president and other high politicians go abroad when they need medical treatment?

This article was also published on Ak News, which lead to this reaction:

In your article dated 2nd of February 2012 entitled (Don’t get ill in Iraq), there were many points that need to be highlighted to deliver your message in an honest, clear, genuine and fruitful way.
To start with, I do agree with the you that the current situation of medicine in Iraq is some how disastrous, but let us be more accurate.
First of all the place your are talking about is (Kurdistan) which is geographically part of Iraq, but if we talk about the medical regulations, inspections and administration of health issues and academic teaching are all run by the authorities in the territory (ministry of Health and higher education) independently from the central government in Baghdad since 1991. I believe we need to get a third party to investigate the case that you mentioned in the article to give the right for all parties. Although they were independent in running their issues for more than 20 years they are still lagging behind in medicine because they did not stick to the mother medical school and medical council in (Baghdad)/ Iraq.
Secondly, the problem in Iraq with medicine and doctors is the poor administration of rules and regulations but the efficiency of those medical doctors can only be judged by independent professionals in the world. We as medical doctors can not judge and criticise writers performance superficially, because it is not our carrier or speciality. The bad practice that was caught does not reflect what is happening in all parts of Iraq, similarly when there is a misconduct in Europe or USA nobody says it is bad in Europe or in the states (if we want to count the medical faults in Europe and USA I can provide you with information that can absolutely fill more than one article).
Thirdly, when writers and media rises such issues, they should look for causes and then solutions.
In regard to the causes you name it (uncountable), from the previous regime foolish decisions to embargo and blockade to the deterioration in the infrastructure and services in the country over the last 2 decades, on top of all that comes the improper strategies implemented in running the higher education and health issues due to many logistic factors that have a direct and indirect links to the political agendas.
We may suggest simple solutions that need some sort of changes in the attitude to get back to the morals of medical doctors that were lost due to the in appropriate way of exposure to the advanced world in terms of changing the medicine into business (with all my respect to the business people because I believe even business has rules, regulations and morals) but what is happening in medicine is simply a mess in everything that needs to be reviewed by the higher authorities and most importantly by the people themselves to be satisfied with the medical service provided in the whole country and not Kurdistan alone!!
Thank you for pinpointing this case, we aim to build the country and kurdistan as part of it, and not merely criticise for the sake of criticism but to correct improve and develop.

And another reaction:
Thank you for your article ( Dont get ill in iraq )
every thing you wrote in article is right .. . and there are more
i wish we can keep in touch with you , i dont exclude ourselves from that bad situation , we are part of it .
what do you expect from country where the ministry of health said by official announcement that Iraq is in need of 7000 ( seven thousands ) anaesthesiologists and all what Iraq has now is 360  !
Thank you again

Dr. Haider abbass
anaesthesiologist
graduated by Iraqi Board program at 2008
Posted by Judit Neurink at 2/11/2012