The stick is called Reber Quick. It is one of the causes of the surge of internet activity in Iraqi Kurdistan of the past year. Relatively cheap and easy to use, this USB stick brought many young people to Facebook.

Internet service in Kurdistan used to be rather slow, and getting it at home still quite costly. This was the time of internet café's. Then a company in the Kurdish capital Erbil came with a USB stick to connect to internet. It worked at home, in the office, in the park. A success was born.

When you are successful, you invite jealousy. Other USB sticks came on the market, but did not become a hit like Reber. And Reber extended its success outside hometown Erbil. Sulaymaniya and Duhok were also conquered. And then problems started. 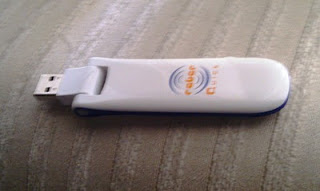 As Reber is partly owned by the Kurdish party KDP, it was playing a home match in Erbil and Duhok. But in Sulaymaniya it was operating on PUK ground. That went well in the beginning. Many thousands bought the stick and the monthly internet time at the Reber office on the main road through town, Salim Street.

Until recently. Suddenly it became impossible to connect to the web by Reber. Many must have, like me, put extra money on the stick, thinking their credit had run out. But to no avail.

Next day at work my staff told me Reber had been closed because of lack of permission. I laughted: ,,That cannot be true. How can the governor decide this when he knows the main victims are normal people?'' Even very simple sums make clear how much money is involved. A Reber stick costs about 70 dollars, and credit for a month about 30 - and many thousands of Suleimani's used the stick.

Soon media picked it up, and they attacked Reber for not providing the service. But was that the real issue? Was Reber to blame, or were the authorities? Because there is a story behind this, as I soon found out. While Reber was working in Sulaymaniya, similar products from Suleimany companies were banned from Erbil. Maxnet, from Fanoos telecom, could not get permission in Erbil. And as Reber is KDP - Fanoos is PUK.What seemed to be a commercial matter, now proved to be a political one.


I wanted my internet back, as did many other people in Sulaymaniya. So I went to Fanoos, and bought a Maxnet set - which by the way was better quality for less money, but that is not the issue And I was not alone. The Fanoos offices were crowded in the days after the Reber stop.So the PUK company was profiting from the governmental action against the KDP daughter.

Yet we all, as consumers, lost money. And hardly anyone is talking about this. We lost our Reber stick plus our credit, and we had to buy a new devise. Reber is not giving us our money back, and even the governor did not tell the company to do so. If this happened anywhere in the West, the outcry would be enormous.

Kurds are used to the fact that parties and economics are mixed. They can tell you about businesses and businessmen and who's money is behind them. An example like this shows, this is not a healthy combination. Reber and Maxnet became part of the struggle that is continuing between PUK and KDP. Officially they are working together, but in reality they are still competing.

Officially Erbil, Duhok and Sulaymaniya make up the Kurdistan Region, KRG. But in reality the animosity from the days of the civil war in the nineties is for from forgotten. And the competition is even leading to the PUK Prime Minister leaving his job half way his term to make way for a Prime Minister of KDP. Had the parties been really loyal to the government they formed, they would have stuck with one Prime Minister. Changing government after just over two years means everything is stopped, decisions are not taken, development is not moving forward, and everybody is waiting for the new ministers to start working. And it could as well mean that decisions taken by the former Prime Ministers' team are turned back.

So this is really about how the story about a small internet stick can tell you all about politics in a region...
Posted by Judit Neurink at 1/16/2012